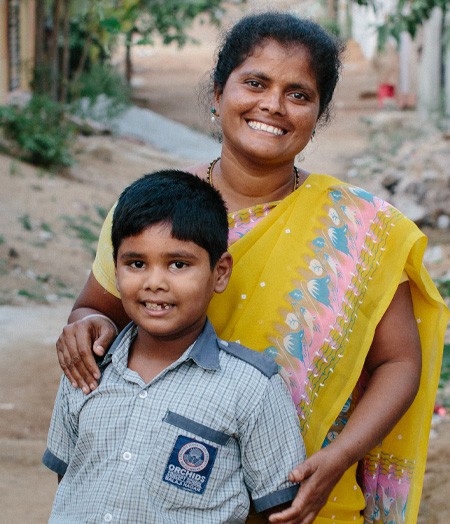 Anasuya is 33 and married with one son. She lives in the Mother Theresa Leprosy Colony with her husband.

At 11 years of age, she began to notice numb, discoloured patches of skin on her right thigh. Her left hand began to claw and her right foot dropped. She lost sensation in both those places. For a long time, she tried to hide the symptoms from her family and friends. Two people in her village had already been separated from their family because of their leprosy diagnosis. Anasuya’s mother had died a year earlier and her father was a terrible alcoholic who cared little for her.

She became suicidal. One day, she purchased some pesticide to drink, but she could not go through with it because of her older brother and her grandmother. She knew her death would devastate them. Her grandmother noticed the change in her and tried her best to support Anasuya. Local doctors misdiagnosed her and gave her herbal medicines until one doctor finally recognised her symptoms and diagnosed her with leprosy.

She took Multi-Drug Therapy for one year and was eventually referred for reconstructive surgery at a government hospital. Still embarrassed by her diagnosis, she refused to tell anyone in her village that she was undergoing treatment. She told people that she was suffering from malnutrition and that it was linked to her mother’s death. She would travel over 20 kilometres to get her medication.

She met her husband, who was also undergoing treatment for leprosy, and they married a year later. They moved into their own home straight away, with financial support from her older brother, and she began working as a ‘lokodooth’ – someone who educates ASHA workers about leprosy.  She enjoyed this work immensely and the purpose it gave her life.

Shortly after this, Anasuya gave birth to a healthy baby boy and has looked after him at home since.

“My son is the most important thing in my life and his education has been supported by Lepra. There is no need to get depressed about leprosy. It is like any other disease and it is curable with medicine.”

She hopes to return to work soon now that her son is settled into school.

Anasuya's story is just one of our "New Faces of Leprosy" series, shot by professional photographer Tom  Bradley. The series focuses on people living ordinary lives, despite their leprosy diagnosis. We aim to highlight that those with families, careers and from all kind of background can still get leprosy.

Please stay tuned for more in this exciting series, as we take a deeper look into the lives of those affected by leprosy.

If you would like help people like Anasuya, please click the button below and donate. Even a small amount can help fundamentally change a person's life who has been affected by leprosy.