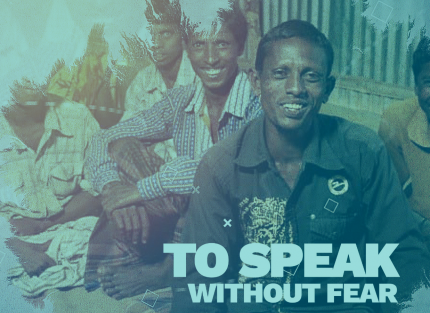 People affected by leprosy face unimaginable prejudice and discrimination and as a result, one in two people suffer significant anxiety and depression, a second invisible disease, which perpetuates a cycle of fear and prevents people from accessing early treatment and vital support.

For World Leprosy Day 2022, Lepra, and our friends and partners across the world are calling for this cycle to be broken, with this year’s theme, United for Dignity.

We want to see an end to the needless discrimination which causes so much harm and greater emotional support for those affected by leprosy.

World Leprosy Day is observed on the last Sunday in January. The day was chosen by French humanitarian Raoul Follereau in 1953 to coincide with the anniversary of Mahatma Gandhi’s death on that day in 1948. Gandhi worked tirelessly to help those affected by leprosy.

In India and Bangladesh, Lepra facilitates community based self-care groups. These groups provide a safe haven, where people affected by leprosy can access support from our specialist healthcare teams.

This environment nurtures a culture where people can speak openly to trained, peer counsellors from their own community, without fear, judgement or prejudice. Peer counselling helps break the cycle of isolation which leads to an improved quality of life and better mental and physical health outcomes.

To mark World Leprosy Day 2022, Lepra has created an online message board on the theme of ‘United for Dignity’. Add your message of support to the board and it will be incorporated into an artwork which will be displayed at our referral centres and programmes across India and Bangladesh.

Next entry: How the past informs the future of emotional support and care