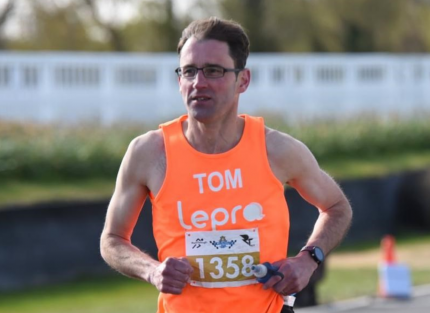 A Marathon a Month

A Marathon a Month

Lepra’s challenge ambassador, Tom Barton, has been running 'a marathon a month' for Lepra since January 2021. Over the course of this year, Tom is aiming to run a staggering 1,800 miles in total, that’s the width of India!

Since becoming a supporter, Tom has raised over £25,000 and has completed a total of 18 marathons.

“Who knows what this year will hold but I thought setting myself the challenge of running a marathon (or more) each month would be a good place to start! As well as fundraising, this year long challenge aims to keep undiscovered illness and disease, such as leprosy, at the front of mind. I’ll be aiming for 1,800 miles in total, the width of India!”

Some of his marathon highlights are below:

April - Goodwood Running Grand Prix 03:02:55, sunny but windy day and an actual race! Great event to be part of on the Goodwood Motor Circuit

Next up: Tom's next marathon is the Clarendon Marathon; an off-road, picturesque but challenging 26 miles from Salisbury to Winchester!  All the best for this run, Tom!!

If you would like to support Tom on his Marathon a Month challenge, visit his fundraising page here.