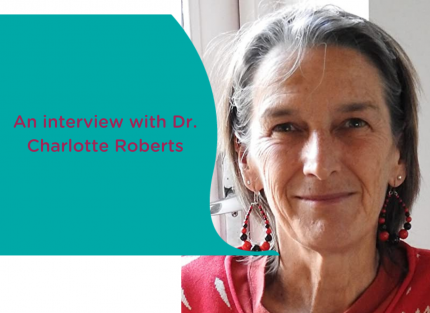 An interview with Dr Charlotte Roberts

Your book, published in 2020, ‘Leprosy Past and Present’, offers a unique insight into the historical treatment and diagnosis of leprosy, could you give us a brief overview of how leprosy was historically treated?

The book has been a long time coming. I am just pleased to have it out. Its publication actually, by chance, coincided with my retirement! It covers quite a lot of ground, ranging from clinical/biological information to the palaeopathological evidence (‘old disease’) for leprosy in the past in skeletons from archaeological sites, and ancient and modern DNA work charting the origin and history of the infection. One of the key findings from the global survey I did on skeletons was that people were not necessarily scorned because of their leprosy. Most skeletons were excavated from sites that were not associated with a leprosy hospital, traditionally thought to be the burial places for people with leprosy in the past. They were also buried normally for the time and place. At times we further see people with leprosy being afforded high-status burial (e.g. in Anglo-Saxon Cambridgeshire). This I think makes me question ingrained attitudes depicted in many historical texts over hundreds of years that describe people with leprosy being ostracised from society, particularly in late medieval Europe (12th-16th centuries AD).
It is also of interest to learn what diagnostic tests were used in the past. Here are some that appear in the literature: looking at evidence for skin lesions, such as nodules on the face, testing urine and blood, looking for the loss of hair, eyebrows and eyelashes, bad odours of the breath and body, and sweating, hearing a hoarse voice, and detecting anesthesia of the extremities. A focus on the face was common but by the 16th century, a consideration of the whole body was felt important. Whether diagnosis was accurate is another question, as qualified and non-qualified people were involved. Certainly, there are skeletons that have been excavated from leprosaria cemeteries that have no bone changes of leprosy, although they could have died before the bone changes were evident. As for treatment, bathing and other treatments for the skin were used, and a well-balanced diet was advocated

Nevertheless, strange remedies were suggested, for example eating heads of scorpions in medieval Damascus, and some medieval authors mention snake meat, blood, toads, frogs, and turtles. Cautery was also applied to skin lesions, and very occasionally evidence for amputation of parts of the body (e.g. feet) has been found in skeletons with leprosy (e.g. 19th century London). Bloodletting and using laxatives to rid the body of leprosy were also advocated, and the suggestion of mercury treatment perhaps indicates some confusion with syphilis in diagnosis; mercury is usually recommended for this other bacterial infection. Last but not least, herbal and mineral remedies, sometimes mixed with animal parts and other products to make ointments, were used (e.g. garlic, nettle, scabious, and violet). Again, perhaps scabious usage reflects some confusion in what had been diagnosed, scabies being primarily a skin disease.

Can you tell us why you first became interested in leprosy in particular as a bioarchaeologist?

This started when I entered the field of bioarchaeology (the study of human remains from archaeological sites). This was in 1983. I had trained to be a nurse in the 1970s, and then I thought I would study for a degree and then return to nursing; always surprising how things turn out in your life, but I really value my nurse training because it benefits my work now when I am interpreting information about diseases I find in skeletons, like leprosy. I chose archaeology and, through various degrees I ended up taking up a research assistantship at Bradford University related to a Wellcome Trust grant held by Dr. Keith Manchester. This was to look at the evidence for leprosy and a related infection, tuberculosis, in skeletons dated from the Roman to medieval periods curated in UK museums. As a nurse, I had never come across a patient with leprosy, although I did nurse a patient with tuberculosis. Thus began my long journey of interest in leprosy, starting with a visit to the now-late Vilhelm Møller-Christensen in Denmark. This doctor, medical historian, and palaeopathologist excavated a leprosy hospital cemetery at Naestved in the mid part of the 20th century. He published widely on his findings and was the first to document in detail the bone changes of leprosy. The Wellcome Trust project finished a few years later, and then I became a lecturer and then senior lecturer, at Bradford until 2000 when I moved to Durham University. There I decided I would like to write a book on leprosy that could bring together all my work on the subject.

It has been a fascinating journey for me and has involved visiting leprosy hospitals in India and Nepal, and the islands of Molokai (Hawaii) and Spinalonga (Crete) where people with leprosy were isolated in the 19th and early 20th centuries. I was also privileged to attend two leprosy congresses. At these congresses in Brussels and in Beijing, I was overwhelmed by the amazing work so many people are doing to help people with leprosy today and the continued efforts to reduce/eliminate stigma. I was also honoured to be able to write a chapter for the International Textbook of Leprosy (https://internationaltextbookofleprosy.org/). However, I recognize that looking to the past to fully appreciate a disease today is important, I also appreciate that it is not as important as the “here and now” whereas, focusing on those living with leprosy today is a much more important and immediate challenge. I now continue to work on leprosy in the past, but keep up to date with developments in that “here and now”. I hope my work will provide a long view of leprosy, and also give people with leprosy in the past a voice to tell their actual stories that are untainted by misconceptions.

There are limitations to any discipline as is the case for medical history or bioarchaeology when studying the past. For medical history, where documents and pictorial evidence are studied, as a bioarchaeologist, I am always very grateful for information about diseases that affect the soft tissues in the past. As I deal with evidence from skeletons, this means that I cannot see markers of diseases that do not affect the body beyond the bones! This includes the plague, cholera, childhood diseases such as chickenpox or measles, and many other diseases. However, some of those soft tissue diseases can be detected using ancient DNA analyses, for example, infections such as malaria. Nevertheless, I am aware that looking at documents and art can be deceptive. We have to reflect on what we understand as a disease like leprosy compared to past perceptions, and we have to assume that people were diagnosing the diseases they report correctly. However, I think the historical and bioarchaeological evidence for leprosy complement each other because bioarchaeology also has its challenges when it comes to diagnosing disease. When identifying diseases, we only mostly recognize those people in the past who had a disease for a long time before they died (healed lesions). However, in the case of leprosy, a person may not have/reveal any bone changes at the time of their death so I will not know they had the infection when they were living. People who die quickly from an acute stage of disease will also not show bone damage if they have a disease that affects the bones. In leprosy, the high resistance form of the disease (tuberculoid or paucibacillary) may not necessarily lead to evidence on their bones because their immune system is relatively strong i.e. they are less frail or susceptible to the infection. To add to these limitations, only 3-5% of people with untreated leprosy will develop bone changes. Thus, I am only looking at the “tip of the iceberg” of leprosy in the past, and those people are the ones who had had leprosy for some time when they died; it is also rare to say what caused the death of a person using their skeleton (maybe an unhealed head injury would give us a clue), and of course, we know that most people today die with leprosy, not of it.

While leprosy is a clinically defined disease, it is also very much a “social” disease and it is perhaps the latter that I find so interesting, including the variation in how people in different parts of the globe, past and present, have addressed and are addressing this infection. However, the most fascinating aspect of studying leprosy that has come out from my work, and others that are following me, is that we are now re-considering the evidence for leprosy in skeletons alongside the way they were “managed” at death (their burial treatment). This has resulted in a change in perception of how people with the disease were treated in the past – from less favourably to being more accepted within their communities. Historians like Demaitre (2007) and Rawcliffe (2006) have also re-evaluated their data, coming to the same conclusions. I hope that this might be a finding that will help people with leprosy today – that historical perceptions really are not as they seem. More advanced methods of analysis of skeletons are also providing some new insights into the origin, evolution, and history of leprosy. Here I am particularly talking about the ancient (and modern) DNA analysis of the leprosy bacterium (Mycobacterium leprae), and Monot et al’s 2005 and 2009 publications are really important.

This research is revealing information about the different types and subtypes (strains) affecting people, past and present, alongside information about where the types and strains are geographically located today. This has enabled hypotheses to be raised regarding where people with leprosy buried in a cemetery may have originated, and perhaps brought leprosy with them to the place where they were eventually buried. Stable isotope (chemical) analysis can also help us understand the mobility histories of people in the past, and this is starting to be done with skeletons with leprosy. For example, a study published in 2017 (Roffey) of a skeleton buried in Winchester with a pilgrim badge showed that he was not local to where he was buried. His teeth showed that he was born and raised in a place where the geology and water were different from where he was buried and that he carried a strain of leprosy that today is associated with South-Central and Western Asia. This suggests he was on the move at some point in his life and likely visited a place of pilgrimage, perhaps to help him with the effects of his infection. Linking together stable isotope and DNA analyses is very fruitful in helping to disentangle the life histories of people with leprosy (and other diseases). We know that people moved around a lot in the past, perhaps not as much or as frequently as we do today (at least in a non-pandemic sense), but stable isotope and DNA information is allowing us to identify people’s mobility histories and making us think about how infections were transmitted between people and populations.

*Dr. Charlotte Roberts latest book, Leprosy: Past and Present, is available for purchase at all good bookstores

Next entry: A Marathon a Month