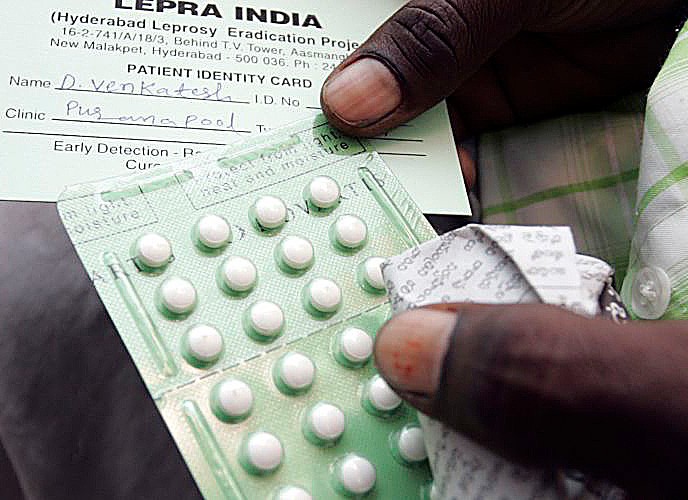 Leprosy is caused by bacteria called mycobacterium leprae. This type of bacteria is called a bacillus – a rod-shaped bacterium which causes disease.

In different people, leprosy manifests in different ways. This is most likely due to differences in the strength of the body’s immune response to the infection.

Most people have an effective immune response to the disease which completely prevents it from developing.  Other people might have a moderate response which limits the effects to only a few skin patches.  This means that the number of leprosy bacilli is quite small (less than a million). The bacilli do not show up on a skin smear test (see diagnosing leprosy) which is negative. This type of leprosy is called paucibacillary, meaning “few bacilli”.

If there is a weak immune response, the leprosy bacilli can multiply and spread to almost all parts of the skin and the peripheral nerves.  The skin smear will be positive and the disease is classified as multibacillary, meaning “many bacilli”.

For the purposes of treatment to cure the disease, we assign each person into one of these categories.  Even without a skin smear, our staff use clinical criteria such as the number of skin lesions and nerves involved to decide on the treatment regime.

Treatment of both types is by multidrug therapy (MDT) in a combination of Dapsone and Rifampicin for paucibacillary leprosy for six months.  Clofazimine is added for multibacillary leprosy and the treatment is for 12 months.  The doses are adjusted appropriately for children under 10 years old.

During treatment and after cure, we work with children, women and men to support them to rebuild their lives.

You can help us reach, diagnose and treat more people affected by leprosy.