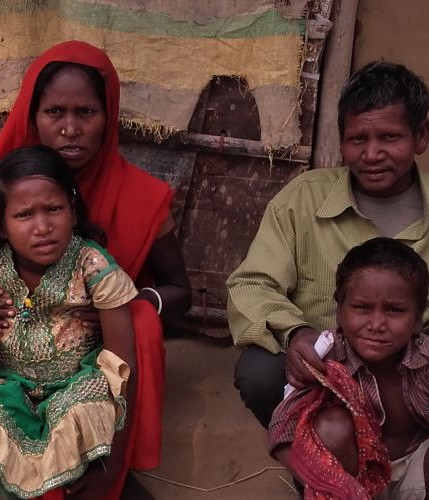 The Manjhi’s are a family of four who live in a remote area of the Munger district in the Indian state of Bihar. They are registered as below the poverty line, where father, Baounu earns a daily wage of 200 Indian Rupees – the equivalent to approximately £2.40.

They are also a family of three generations who have been affected by leprosy.

Baounu, contracted leprosy seven years ago, mother Kasho Devi too had contracted the disease 5 years ago, and Baounu’s father, (the children’s grandfather), Boran Manjhi, was also affected by leprosy. They were all treated at the local primary health care centre, but they were irregular in taking the medication and none of them were aware of leprosy and its consequences prior to diagnosis.

After carrying out a recent active case finding survey – a method of screening communities and households for leprosy, we found that their two young children, Gudiya, aged ten and her brother Pardeshi, aged eight both had the disease. They are now receiving regular treatment and because they were diagnosed early, they will not develop any disability as a consequence.

Due to the thorough nature of our active detection surveys, other family members were checked for leprosy too and, thankfully, nobody else shows any sign of the disease at this moment in time.

Gudiya says, “After completion of my education I want study to become a nurse so that I can serve of my village.”

Each family member now has the knowledge to recognise the symptoms of leprosy and if they meet someone showing the signs, they will be able to advise them to seek treatment before the disease causes irreparable damage.

This story highlights just how fundamental active case finding is in our fight to beat leprosy and we now plan to upscale these methods to find even more people living undiagnosed with this disease.