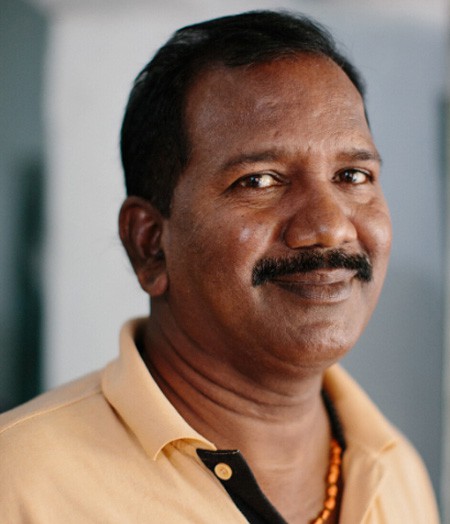 Srihari works as a motor mechanic in Secunderabad, India. He has a Bachelor of Commerce degree.

In 2019, he noticed that his hands were growing weak. He could not grip things and this made his work difficult. Srihari had seen a poster about leprosy and it prompted him to look up his symptoms on the internet. It was there that he read about Lepra’s Blue Peter Public Health and Research Centre.

In March, he visited the centre and was formally diagnosed with leprosy. Lepra staff prescribed him multi drug therapy, which he is still taking to this day.

His wife is the only one that knows he has leprosy but he says he will tell his children, once he is finished treatment.

He does not want them to worry about his health as he also has high blood pressure and diabetes. He has seen the bad images of leprosy on the internet, and was frightened that this was his future.

Lepra have shown him that this is not always the case with leprosy. It is curable and there are ways to correct deformities and strengthen muscles.

“The counselling at Blue Peter Public Health and Research Centre have allayed my fears. I have been able to continue working without any problems.”

Srihari would advise new patients to not worry and that there is a cure.