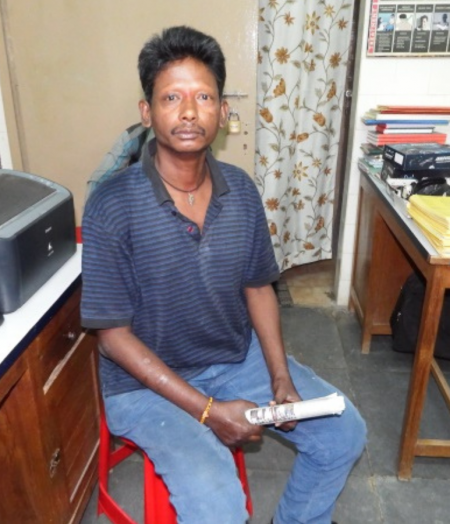 Shanthanna was diagnosed with leprosy four years ago.  Although he was treated, the discrimination he suffered has cost him a lot; his wife, his home and his livelihood.

After diagnosis, Shanthanna's wife left him. The couple had already been struggling after the death of their two-year-old son two years prior, and his leprosy diagnosis was the breaking point for his wife. Shortly after she left him, he also lost his parents. The mental health impact of his leprosy diagnosis, coupled with the extreme discrimination suffered and the loss of his family sent Shanthanna to despair.

His leprosy-related disabilities were so severe that he lost his job and his remaining family members disowned him due to discrimination. They felt his disabilities made him impure and they made incorrect assumptions about leprosy, despite the fact that it is an extremely curable disease. The local community also turned their back on Shanthanna, and wouldn't let him into their homes or businesses.

Discrimination against people affected by leprosy can impact their mental health negatively, and Shanthanna felt hopeless, alone and afraid.

“Nobody will accept me. My friends stay away."

Despite having an education and a family, leprosy stole everything from him until he became destitute and alone and forced to beg in order to survive.

“Where could I work? What could I do?”

And then Lepra stepped in.

Lepra's referral centre in Mahbubnagar was the perfect location for Shanthanna to receive care. Lepra's holistic approach to leprosy treatment, which includes physical and psychological support, makes all the difference in treating leprosy. Lepra staff are trained to educate communities about leprosy and teach them that there is no need for fear of discrimination.

Shanthanna visits the centre each week to practice self-care methods and Lepra is working with him to help him access disability grants. He has received numerous reconstructive surgeries and was also fitted for speciality shoes which have helped restore his independence. Most importantly, Lepra staff have taught Shanthanna that a leprosy diagnosis is not a death sentence. There is life after leprosy. With some care and patience, he will get his life back.

Discrimination against people affected by leprosy, just like Shanthanna, places serious strain on their lives. It can cause people to lose their families, homes and even their sense of self-worth. Lepra continues to educate people about the treatability of leprosy and strives every day to eliminate discrimination and prejudice against persons affected. One day, leprosy will be a disease of little consequence and there will no longer be any discrimination.