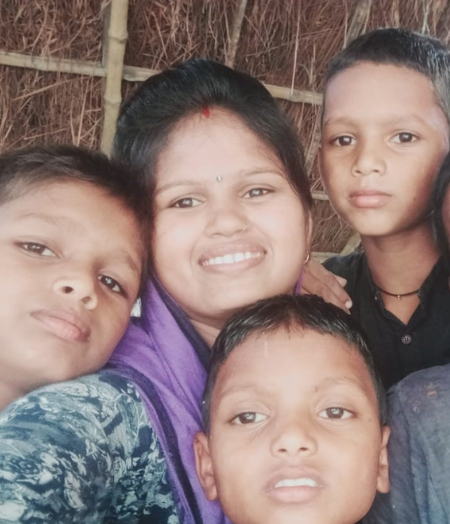 A champion for early detection, Sarita travels in IEC (Information, Education, Communication) vans to remote villages and advocates for early detection. People in rural areas and other health workers often do not know about the treatment and self-care for leprosy and lymphatic filariasis (LF).

Sarita encourages local doctors, ASHA workers and the community to actively participate in health camps, and other community events and promotes Lepra’s unique model of a combined approach of management of leprosy and LF. With the help of Lepra, she has built community-led initiatives and instilled a sense of responsibility and trust in the community to own their well-being and combat leprosy and LF.

During one of her visits to the remote village of Jitwarpur Nizamch Panchayat, Sarita identified 15 people (nine children and six adults) affected by leprosy. She accompanied them to Sadar hospital in Samastipur. While the adults found their way to a general physician, Sarita took the children to the paediatrician, Dr Nagamani. One of these children was Shakila, who’s story you can read here.

Sarita told Dr Nagamani that the children were affected by leprosy and needed to be treated with multidrug therapy (MDT). The doctor was surprised at how much Sarita knew about the disease and its treatment, even as a qualified doctor he did know much about leprosy and was unaware of its prevalence. Sarita urged him to refer the children to the District Level Office where there was a leprosy clinic. Once at the clinic their blood samples were taken, and the report confirmed leprosy.

Impressed by Sarita’s knowledge and drive, Dr Nagamani began to realise the gravity of the health problem in Samastipur and its districts.  He called for a news release, where he unabashedly spoke of his and the healthcare systems’ ignorance and the rising cases of leprosy.

The news coverage created a stir. The local authorities came to the hospital and the District Magistrate personally came and met Dr Nagamani and Sarita. Sarita spoke about Lepra’s model of combined approaches, the need to strengthen referral systems, and about the RLFP project and its services. But the most important message that went through was the need for community engagement.

The District Magistrate and the Chief Medical Officer soon became involved in ensuring access to treatment and inclusion of leprosy affected people in the socio-economic fabric of the state and community. The state government adopted the Lepra model Morbidity Management and Disability Prevention (MMDP), and engaged Lepra as a resource team.

Today, the villagers feel secure in the knowledge that they have state support and easy access to information and treatment. People affected with leprosy are finding gainful employment through government schemes and there is a concerted effort to reduce prejudice and discrimination.