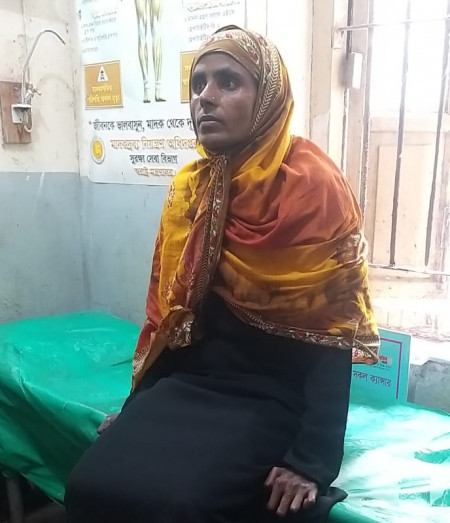 Samida Bewa is 35 years old and from Sylhet, Bangladesh.

Ten years ago, Samida noticed that one of her fingers was slowly becoming curved. She didn’t know why or what was causing the changes to her hands. With high levels of poverty and a lack of awareness of leprosy, Samida did not have access to suitable medical care and her symptoms were overlooked. Over several years, she noticed that her fingers were becoming more and more disfigured, and she was now developing ulcers on her feet.

Samida’s husband, Jamir Ali, sadly died six years ago, leaving Samida and her children. At such an emotional time, Samida had to move with her children to her father’s house and, due to the nature of her disability, found she was unable to work. In sheer desperation to make ends meet, Samida turned to begging and had been begging on the streets for two years when Lepra’s team in Bangladesh met her.

In early June 2022, Lepra’s team in Bangladesh were providing much-needed healthcare services in the local area. Samida was referred to Lepra for diagnosis by a health assistant who had heard about Samida’s story. After meeting Lepra’s team, Samida was taken to hospital where she started treatment, with multi-drug therapy (MDT), for leprosy and received emergency care for the ulcers on her feet.

Samida has fought for the health and wellbeing of her beloved children, for which she tries her best to provide. She has lived in fear of the disease and what the future may hold for her family, but with Lepra’s care and support, she is beginning to believe that she will one day recover, so she can find employment once again, and life will become much easier for her and her children.