Ramesh is 28 years old, lives with his wife and two children and works as a salesman for a pharmacy.  Ramesh was diagnosed with leprosy and received treatment from a private doctor in order to hide his leprosy from family members. His father, who had also been treated for leprosy, noticed that Ramesh had nodules on the skin around his ears and referred him to Lepra’s Nallakunta Referral Centre.

Lepra diagnosed Ramesh as having multibacillary (MB) leprosy, which can cause a person to develop serious disabilities, including Erythema Nodosum Leprosum (ENL), a reaction causing painful skin nodules to appear on his ears.

While screening Ramesh, we noticed that both of his eyes had early signs of lagophthalmos. 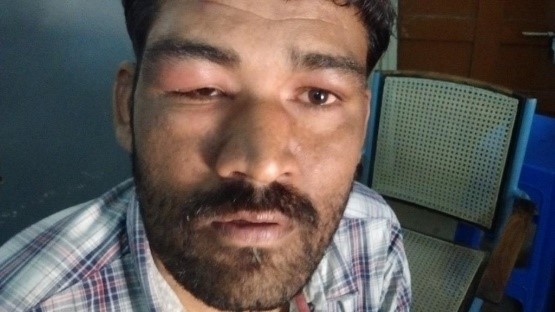 A condition where the eyelid muscles stop working due to nerve damage from leprosy. This condition reduces a person’s ability to blink, which can eventually lead to blindness. These reactions can have a serious and long lasting impact on a person mental health, causing anxiety, depression and even suicidal ideation. As the condition was caught early, as well as treating Ramesh for his reaction nodules, Lepra was able to provide physiotherapy exercises for his eyes and he has now completely recovered from ENL.

Ramesh is happy now to be able to work and provide for his family as normal.