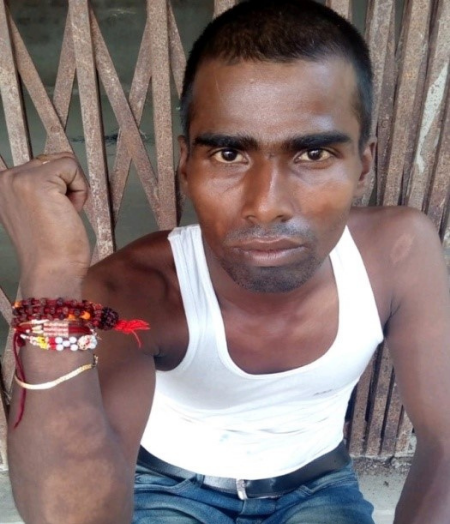 Rakesh is a respected village school master and private tutor.

Leprosy is a bio-social disease, and people affected by leprosy face not only medical and social problems, but also economic problems. There is a continuum to this disease’s impact

As white patches began to spread to Rakesh’s face, his tuition students stopped coming to his house and the school authorities asked him to stay away from teaching.

Rakesh tried to receive appropriate treatment from various doctors, but none of them were of the leprosy treatment called Multi Drug Therapy (MDT) and his condition only worsened. In India, matrimony is a critical determinant of a family’s standing in society. Rakesh and his family’s main concern was about finding him a bride who will accept him despite his progressive illness.

“When we couldn’t find a ‘suitable match’ and my condition worsened, I wanted to kill myself.” - Rakesh

Coincidentally Manisha from Lepra Society met Rakesh during one of her house visits. She convinced him that leprosy was curable and once he started MDT, it will no longer be infectious. The very next day he went to the leprosy clinic in Samastipur, run by the Restoring the Lives of Forgotten People (RLFP) project, where he met the doctor and the physiotherapist, Reeturaj. Once on the MDT, Rakesh started seeing a visible change and slowly all the patches on his face disappeared. This major improvement was a huge relief for Rakesh and his family.

For Rakesh, life began to resume normality, and one again he began to teach, and his social life was busy and happy. Within a year he was married and today he leads a happy life.

Another example of a life restored, Rakesh is at the forefront of dispelling myths that surround leprosy, so that no one goes untreated.