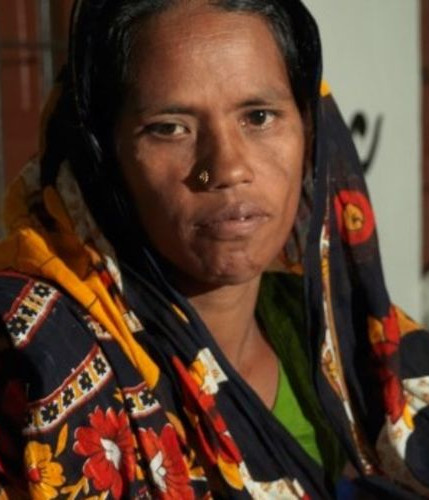 We met Rahima on an inpatient ward at Dupchancia hospital in Dhaka, Bangladesh. She was being treated for leprosy and began to tell us her story...

“My husband left me because I was disfigured by leprosy and the unpleasant smell from my ulcers, which were so ugly. Four months after he left me, our baby son died. I couldn’t afford any medicine.”

Farhana from who works for Lepra in Bangladesh explains that the baby had pneumonia. Like his mother he had been in a poor state with ulcers on his back and his face.

The ignorance about leprosy means that I was not caught soon enough and I lost sensation in various parts of my body and the disabilities started. I also suffered a reaction to my patches which caused swelling and joint pain. Gradually, I started losing my fingers and my ulcers began to smell.

When her husband abandoned her, Rahima struggled to provide for herself and her son. Given that leprosy is entirely curable and only leads to disability if left untreated, it is hard to believe people in places like Bangladesh are abandoned and disowned for contracting leprosy.

Our success in helping to overturn a law which prevented people affected by leprosy from entering or being treated in government hospitals in Bangladesh means that they are finally admitting people like Rahima. Her feet were bandaged and she was unable to walk from her government hospital bed.

One big challenge in achieving fair and equal treatment lies with other admitted patients who do not want to share a ward with someone who has leprosy. Luckily Rahima’s fellow patients aren’t treating her differently.

At this hospital we have trained staff not only in treatment and care but in how to teach other patients about leprosy. There are Lepra leaflets and posters about leprosy on the walls in reception.

Shahara, a patient sitting the bed opposite Rahima tells us that, “Around two to three months ago I saw posters on the wall telling me all I need to know about leprosy. I don’t worry anymore.”

As well as learning how to care for her ulcers, Rahima has learnt how to rear goats and ducks. She did this through a Lepra self-help group and has gone on to use a loan from the group’s fund to start a new life for herself.

In my village I borrowed 2,000 taka (£18) from the Lepra self-help group that I joined eight months ago. Livelihood training from Lepra included gardening and duck and goat rearing which I took up. I bought a goat with the money I borrowed from our savings and she will hopefully give birth soon.

‘One day I dream of buying a cow. I still live with my sister who took me in after my husband left me. I just want to do all I can for her children and repay her for helping me.