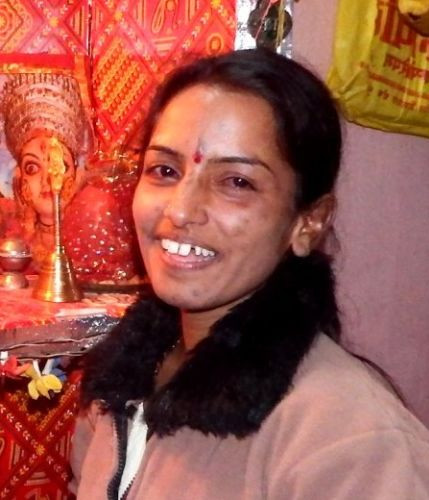 Rachna lives in Bihar, one of the poorest states in India.

She first noticed dark spots appearing on her forehead and across her face, and began to lose sensitivity in her hands, meaning she was unable to do basic things.

Before, I couldn’t do basic things like cook, put on clothes or carry heavy things

Rachna struggled to get a diagnosis and only after she became severely ill was she diagnosed with leprosy. She endured lengthy treatment of multi-drug therapy before finally being cured.

Now she supports other people affected by leprosy and other diseases, encouraging them to seek diagnosis and helping them care for their disabilities.

Because of Lepra’s support I feel completely better. They gave me counselling, treatment and health assistance. They arranged for me to have eye surgery in both of my eyes

But there is still prejudice surrounding leprosy in Rachna’s community. Those who are affected by the disease are often made to feel ashamed and no one wants go near them.

I didn’t want to tell anyone about the disease after knowing that my own family felt differently towards me. My parents didn’t tell anyone in the community because they were afraid that everyone would hate me.

Rachna’s experience has inspired her to help provide relief to those in the same situation and dispel the myths surrounding leprosy.

My dream is for India and the world to be free from leprosy. Why should they be kept away from society? This is like any other disease and they have a right to dignity and respect.

In 2012 Rachna became a community ambassador and is now a full time Lepra employee helping other affected by leprosy. She leads health education camps, teaches self-care and works closely with the local leprosy colony, helping to prevent disability.

In 2015 Rachna joined the ILEP advisory board giving a voice to those affected by the disease and helping to influence ILEP’s activities.

This support has changed my life; I am happy and I love my job.