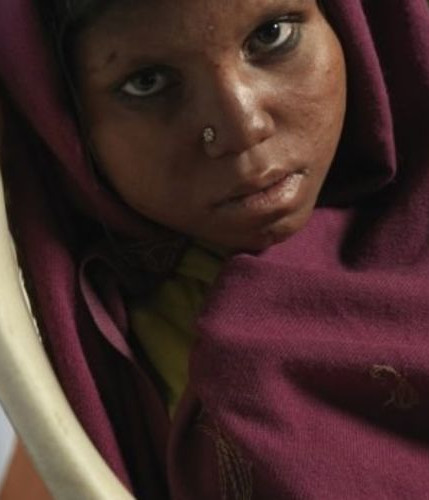 Pinki is 13 and lives in Munger District in Bihar, India. Bihar state has a population 1.5 times higher that of the UK and is poorer than Sierra Leone.

Pinki has been suffering for a month with a persistent high fever and severe joint pain.  She has already been to a local primary health centre.

It cost her father a week's earnings to take her. Here she was given Paracetamol for the pain, it didn't help. No further tests were done.

At the free walk in clinic at our Munger Referral Centre, Dr Girish Srivastava suspects that Pinki has leprosy.

Pinki's father waits anxiously with her as the doctor observes signs of a leprosy infection. A large queue is forming outside the door as people wait to be seen.

“I was not aware of leprosy before. There is only one known case in the village; a man in his 60’s with severe deformity. Now my daughter has the same condition.”

The doctor explains that without immediate medical treatment Pinki will loose function in her left hand; leaving her with a lack of sensation and unable to move her fingers.

Pinki is then taken to our lab room where smears are taken from her ears and patches on her arm.

Pinki was upset by the news. In addition to providing diagnosis staff are on hand to explain the treatment and alleviate her concerns.

Diagnosing leprosy early and treating it properly means that Pinki will be able to use her hand again.