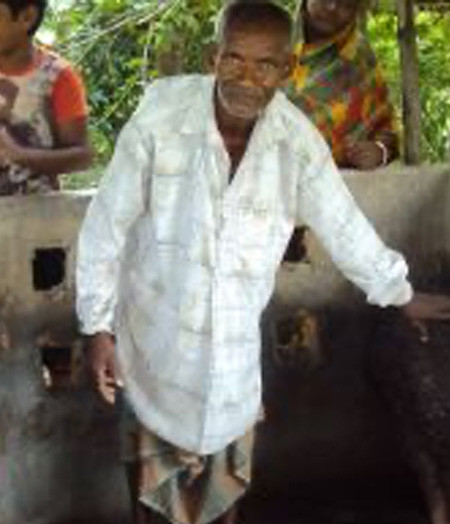 Nisi is 45 years old and lives in a small village in the Sirajgonj district of Bangladesh. He has been affected by leprosy and although he’s completed multi-drug therapy and is now cured, he will never regain the loss of sensation in the soles of his feet. The fact I cannot feel his feet mean he is susceptible to cuts and burns which leave him more prone to infection.

The risk of further infection stopped Nisi from being able to work and it was left to his family to support him, something he was ashamed about. He says that a visit from one of our community champions changed all of that.

They saw that he was affected by leprosy and encouraged him to visit our nearest referral centre. There he was counselled by our staff, learned how to care for his feet properly and even went through physiotherapy. Nisi then received a pair of our protective footwear which he says really made a difference.

“My neighbours used to avoid me because of my ulcers. Lepra staff taught me about self-care and provided me with footwear. Due to practicing self-care at home as well as using the protective footwear, I am now free of ulcers and I am accepted by family as well as my neighbours.”

Taking it a step further, Nisi joined one of our self-help groups. This is where people affected by leprosy come together to learn a new skill or to advocate for their rights.

The group also has a loan fund that we helped establish and through this Nisi was able to buy a pig which helped him to earn a living. He was then able to pay back the loan so that someone else in the group could also use the money.

Without your support, Nisi would have struggled to become accepted, to provide for himself and to get over his shame. Allowing Nisi to simply walk again encouraged him to take gigantic leaps. He has now become something of an entrepreneur leasing out his lake, investing in fisheries and buying and selling his pigs for a profit. He tells us that he no longer feels embarrassed, his family accept him fully for who he is and he’s respected by his community because of his entrepreneurial spirit.

All it took was £6 to provide two pairs of shoes for the year that would help Nisi make that initial step in regaining his confidence.