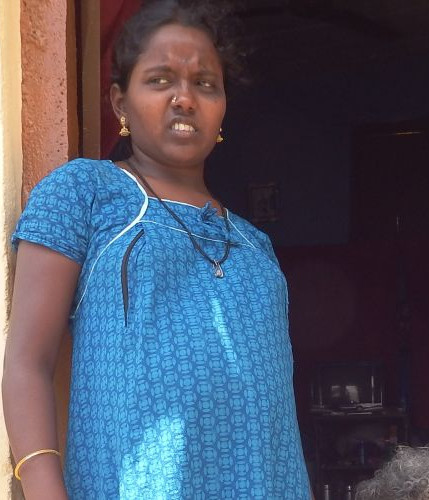 Nagama is 24 years old. Her eyes are bright; she wears a big grin and  has a matching big bump that carries her eight month old child. The way she talks and continues to smile you’d think she had no worries at all. She’s happy and totally unencumbered by her surroundings which just happen to be a leprosy colony on the outskirts of Mahbubnagar in India.

The colony is made up of a small community that sits on the top of a hill completely ostracised from the town’s main activity. The few buildings they have appear to be crumbling away and the rubble and rocky slopes make for a tricky site to navigate, especially for those with disabilities.

Despite her poor surroundings Nagama is cheery, just like any expectant mother who cannot wait to meet her new born baby. This is thing we find surprising about her.

The second thing that surprises us is the fact that she lives here in the colony. She’ll have her baby here and will raise it here but what gives us the real shock is that she doesn’t have leprosy. She has never had the disease and hasn’t been shunned from her community, so why is she here?

She has chosen to live in the colony. Her mother, Narsama, and grandmother, Miriam, have been affected by leprosy. They are the ones living with a loss of vision and who have found themselves as old women struggling to get by and living in the colony.

Nagama used to live with her husband until one day it got too much for her. She couldn’t bear the thought of her mother and grandmother fending for themselves. How would they eat? They could easily fall and who would keep their infected body parts clean?

So Nagama left the comforts of her city home, her university education and the security of her husband and moved into the colony. Although her husband occasionally visits her, he has since remarried and his current wife is also expecting.

“I don’t care that he’s with someone else,” Nagama tells us. “I even went to the wedding.”

Taking it one step further, Nagama confesses that his current wife is in fact a relative. None of this seems to faze her.

“I’m just very happy to be able to take care of my family.”

And she genuinely seems to mean that. She laughs and smiles and seems so unperturbed by the fact that she’ll be raising a child in an extremely poor environment and bringing it into the world already bathed in prejudice because of the association to the colony.

While our staff visit the colony often, providing ulcer care and protective shoes, it’s usually to help those affected by leprosy. In Nagama’s case though, we were amazed by her sacrifice and want to help ensure she has a life beyond the colony. To do that we are funding her education and, once the baby is born, she’ll go back to completing her open university degree.

When asked about nerves about the birth she says she has none. When we ask about whether she wants a boy or a girl, she simply says, “I really don’t mind.”