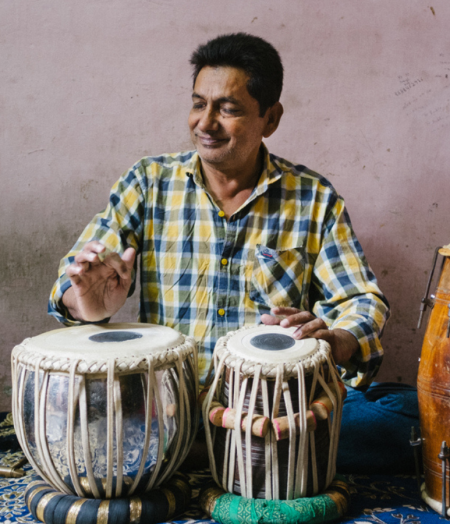 Muneer has been a professional tabla player for 30 years. Tabla drums are small hand drums used in Indian music, one of which is slightly larger than the other and is played using pressure from the heel of the hand. His father, grandfather, and even great grandfathers played the tabla.

While playing in Kolkata, Muneer developed pain and weakness in his hands. He visited a doctor in Kolkata who recognised the symptoms of leprosy and started him on medication straight away. Muneer did not see improvement in his hands after a few months and stopped taking the multi-drug therapy. During this time, Muneer was very upset. He avoided getting married until he was 42 and his wife still does not know he has leprosy.

When he left Kolkata, Muneer decided to resume treatment for his leprosy. At this time, he visited the Dhoolpet Referral Centre and the Blue Peter Public Health and Research Centre. He began taking multi-drug therapy once again.

He worries that his income isn’t enough to support his children and his wife. He wants his children to get the best education they can.

He wants to let know the newly affected people that constant medication and adhering to doctor’s consultation helps the disease to be controlled.