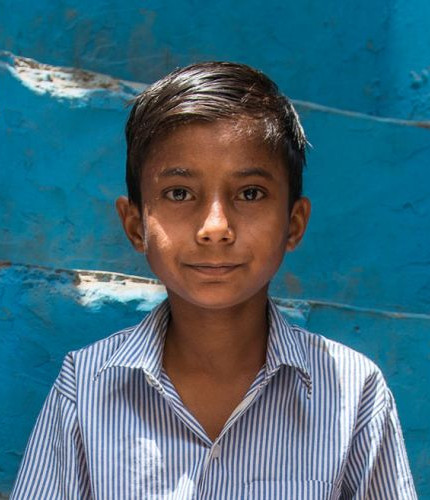 When Mubarak  was ten, he started feeling weakness and discomfort in his left foot. His mother, Sabana, took him to the local doctors where at first, he was diagnosed and treated for polio, but, as time went on, his disability became worse.

Desperate for help, his mother sought a second opinion and he was eventually diagnosed with leprosy. However, he was provided with very limited medicine – without counselling or any disability support services.

Over the next few months, Mubarak showed no sign of recovering. Sadly, due to an injury caused by not being able to feel his feet, Mubarak also lost a toe.

Sabana took him to other doctors and he was even admitted to hospital for a month. But this expense was too great, so she made the decision to move from their home in Bihar to Delhi to get the treatment her son needed.

Sabana says, “When I came to know Mubarak had leprosy, I was very upset. When he didn’t get any better, I knew that medicines were available in government hospitals in Delhi where my sister lives.

"I asked my husband to come with me to get treatment for our son, but he said he didn’t want to. I took all four of my children alone and we set off and boarded the train to Delhi.”

A new beginning in Delhi

Sabana brought Mubarak to our referral centre in Delhi where we provided him with the free multidrug therapy (MDT) and physiotherapy.

We created specialist footwear for him, which now helps to protect his feet from further injury and we have also provided an appliance for his leg to help strengthen his foot and ankle muscles. Mubarak will need to wear the appliance and take MDT for six months. If his condition doesn’t improve, he may also need reconstructive surgery.

Mubarak’s story shows how damaging a late diagnosis can be. He has been left with disabilities which could have been prevented, while his family has been uprooted and separated, due to receiving inadequate medical care.

All of this could have been avoided had the medical staff in his community been better educated about the symptoms leprosy and issued the correct treatment.

As with so many other cases, leprosy did not only leave Mubarak disabled, he also suffered a great deal of emotional trauma. Both his father and his extended family  shunned and rejected him, refusing to offer any support. This has also caused great financial hardship for Sabana and the whole family.

You can help put a stop to disabilities caused by misdiagnosis.

With your help we can train more doctors to recognise the symptoms of leprosy, so that children like Mubarak can be treated early, before disability sets in.