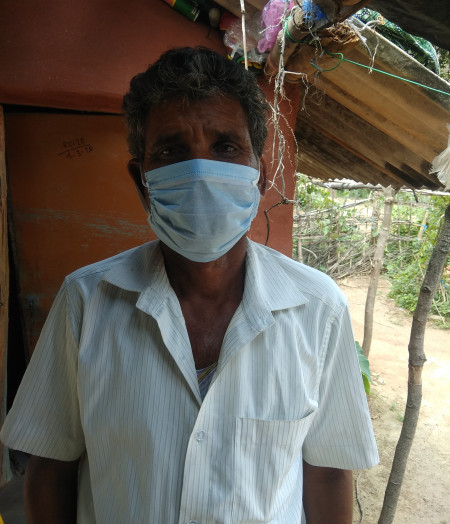 Mr Kusa Gauda is 52 and lives in Gadhabaguda, Odisha state with his wife and three children.

At 17 years old, Mr Gauda noticed anesthetic patches on his skin but due to a lack of access to effective healthcare, over time his condition worsened, causing disabilities to develop in his hands and feet.

Facing terrible prejudice from his community, he was eventually treated at a specialist unit in Nabarangpur. It was there, he met his future wife, Sarojini , who was also receiving treatment for leprosy.

The family have faced great hardship over the years. Mr Gauda’s wife also developed disabilities as a result of leprosy. Additionally, they supported their eldest son who has bilateral blindness.

In 2013, a Lepra Society community healthcare team, visited Mr Gauda’s village and on examination, found further complex ulceration of his left foot. The team referred him to Lepra’s in-patients ward for further treatment and ulcer management. After an 18 day admission, his condition improved which allowed him to return home to recover. Mr Gauda was also provided with custom-made protective footwear by Lepra’s mobile podiatric unit, to help the long-term management of his disability.

During the pandemic, Lepra, with the support of the District Leprosy Officer and funded by Effect Hope, provided vital information and support around the importance of receiving COVID-19 vaccinations. Many people in the community were hesitant and had concerns about the safety and efficacy of vaccination. Lepra’s intervention helped people affected by leprosy make informed choices about obtaining vaccinations.