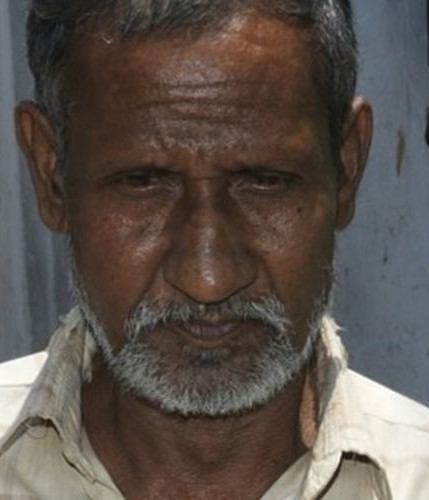 Fifty-five year old Moti has lymphatic filariasis (LF). He has been living with the swelling caused by damage to his lymphatic system for more than 20 years. Skin infections are a common side-effect of LF.

These infections have meant that Moti has suffered for years with fevers, lasting up to two weeks at a time.

Moti used to run a laundry. LF means that he can’t work anymore.

“I am not earning money. This is no way to live my life. Because I have a heavy leg I can’t move easily.”

The deformity to Moti's right leg, caused by this mosquito-borne disease, is evident for people to see. Moti says that this made him feel paranoid about what other people were saying about him.

Prejudice comes in many forms; one which we mustn’t overlook is self-discrimination. This can cause someone like Moti to lose their confidence and can be as debilitating as the physical effects of disease.

Moti felt that he was a burden to his family and that he was to blame for his condition. When we first met Moti he was living as a virtual prisoner in his home.

We taught Moti how to wash and dry his swollen leg correctly to reduce skin infections, together with simple lymphatic massage techniques to reduce the painful swelling.

Physiotherapy and counselling at Moti’s home have helped him to improve his mobility and state of mind.

Moti is smiling when he looks at his young grandson. He tells us of his plans to open a ‘Parchun’ shop, a small deli selling rice, wheat and vegetables from his home.

“After meeting with Lepra, I got hope. Lepra has changed my life.”

LF is the second major cause of disability in the world, after mental health. With your support we can continue to help Moti and others like him.