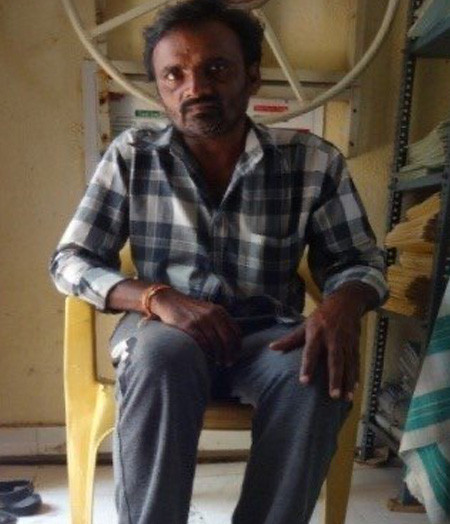 Midatani, 38, is married with one daughter. One day while working, he noticed a large anaesthetic patch on his right lower leg and consulted a pharmacist. He was prescribed general medication, but it did not help and in a matter of months the numb patch on his leg expanded. After consulting the local health provider, they were unable to diagnose his problem and his condition worsened.

Midatani suffered prejudice and was isolated from his friends and family. He then visited a Private Hospital, who referred him to a District Hospital for confirmation. In 2017, he was screened and diagnosed with leprosy, started on multidrug therapy and referred to the Referral Centre for a nerve function assessment.

The physiotherapist assessed Midatani and tested his muscle strength and ability to move. His mobility was not great, and the numbness was persistent.

A month later Midatani visited the Referral Centre as he felt a burning sensation over the tip of his toes on his right foot, he was advised on self-care methods and to make a follow up appointment after two weeks. Yet within a week, his feet had suddenly gone numb and he was unable to lift his right foot.

Despite home remedies, his symptoms worsened, and he even developed pain in his right leg. He was unable to wear shoes or move his foot. Midatani attended the referral centre again and upon examination, it was discovered that the numbness had spread so much that he had muscle paralyses in his lower right leg and foot.

He was put on steroid therapy for neuritis and given physiotherapy. Lepra provided him with specialised footwear and taught him how to look after his damaged leg.  After a few weeks, his muscle strength was restored to normal, and was able to walk on the heel and tip toes. He is continuing Multi drug therapy.

Midatani is happy that he came to the Referral Centre, and is sure that his disease is curable. In his words, “Today I can see the positive results, and now I am confident that I will be able to live a normal life because of the support from LEPRA!”

Help others like Midatani to be able to not only be treated and cured, but to be able to return to his life and show his community, and the world, that leprosy does not mean your life has to end!