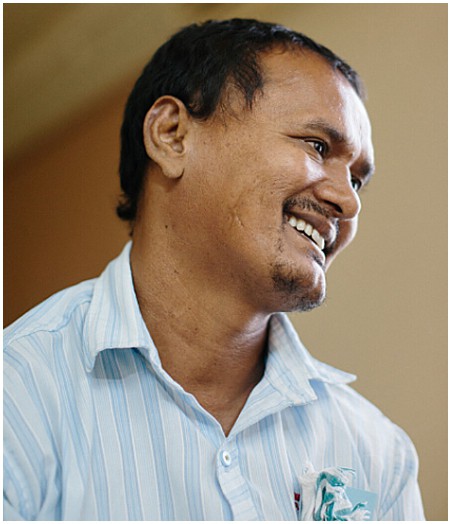 Lalith, originally from Nepal, came to India to earn money for his family.

He is married and has two children but he only gets to see them every two years, when he can afford to go home.

Lalith began to notice blisters on his body, which spread slowly.

He then attended a private hospital in Hyderabad and was diagnosed with leprosy.

For six months, Lalith took multi drug therapy but he was unable to afford the hospital bills and could not continue. He was referred to Lepra’s Blue Peter Public Health and Research Centre to continue his treatment.

He developed painful reactions to his leprosy treatment, including painful red lumps across his body and severe joint swelling. He was prescribed steroids to combat the reactions.

In Nepal, leprosy is also a public health concern. People from his village know that he has leprosy.

His parents worry for him, but Lalith feels responsible for sending his family money so he continues to work hard as a caterer.

Lalith now refers people to Lepra’s Blue Peter Public Health and Research Centre and makes sure they get treatment.

You can help make a difference to the lives of people like Lalith by making a donation using the links below.