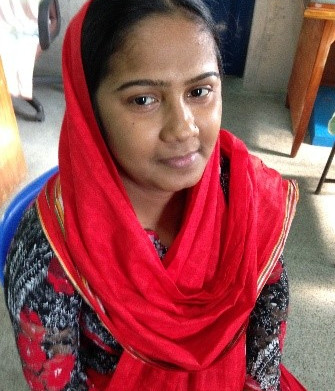 Fatema, aged 25, living with her husband and 8-year-old son Rahat, is a young woman who was diagnosed with leprosy a few years back and was cured after receiving multi-drug therapy, a combination of antibiotic medicine recommended by the World Health Organisation. Although she was cured of leprosy, she later developed neuritis (severe pain due to peripheral nerve inflammation).  This was due to the fact that her leprosy diagnosis was not detected until some years after she first contracted it.

She asked her husband to take her to a specialist leprosy hospital as the recurrent pain had become intolerable and she was worried about the gradual loss of sensation in her right foot. Fatema says, “I have no idea why I had this reaction problem, particularly as the doctors had already prescribed medicine for this”.

Her husband was hesitant about taking her to the specialist hospital because of the prejudice and discrimination surrounding leprosy.  This continued lack of information and knowledge about leprosy illustrates how people affected still live in fear of their diagnosis becoming known within their community.

Shortly after asking her husband for support, Fatema woke up and couldn’t find her son at home.  When she asked her husband where Rahat was, it emerged that his father had arranged for him to be sent to a boarding school. “My husband was very afraid and concerned about the future of our son, as I had leprosy, so he sent him away from home”, Fatema says.

Suffering with acute nerve pain, receiving medical support for her condition and the subsequent trauma of having her son taken away from her, Fatema was under enormous stress and she had started to lose hope. “I couldn’t even touch my own son!”

She also noticed a deterioration in her relationship with her husband, they were sleeping in different beds and he had become distant, at a time when Fatema needed love and support.  She felt isolated and did not know where or who to turn to.  Her physical and mental condition began to deteriorate further and she became increasingly ill.

A friendly neighbour, who was also affected by leprosy, noticed Fatema’s deterioration and offered to accompany her to the nearest leprosy hospital in Nilphamari where she was admitted.  One of Lepra’s doctors provided an assessment of her condition, treatment, and care.  Fatema shared her painful stories with deep sorrow about her loneliness and how she felt ‘cast out’.

After returning from hospital, Lepra arranged specialist counselling and emotional support, not only for Fatema, but also for her husband.  Taking a holistic, person-centred approach, Lepra is able to significantly increase the quality of life for people affected by leprosy, and as in this instance, not just the person who has leprosy.  We know that our work not only improves the physical health outcomes of the people we support, but also their emotional well-being, which is critical to their recovery.

As a result of the care provided by Lepra, Fatema and her husband were able to work through the difficulties they faced, Rahat was able to return home and Fatema was able to lead the life that she truly deserves, without fear or prejudice.