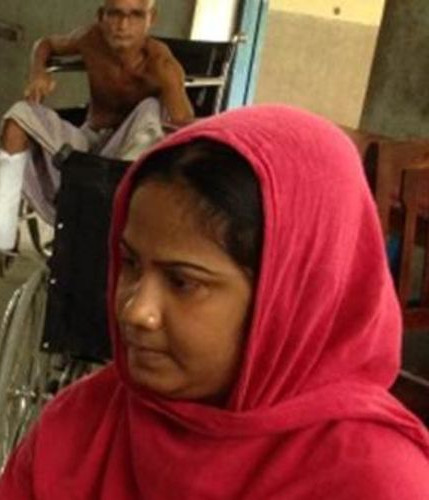 Fatema is 25 years old and lives in Bogra, Bangladesh. She is married and has an eight-year-old son called Rahat.

After developing a white patch on her stomach four years ago, Fatema visited a number of clinics and was eventually diagnosed with leprosy.

Whilst undertaking a six month course of multi-drug therapy, she experienced a repeated reaction during this treatment and developed a loss of sensation in her right foot.

Since being diagnosed with leprosy, Fatema has used a loan from a local community group to buy a sewing machine and has earned more than 8000 Taka (just over £60) in one month.

But over the last few months, she has often been unable to open her shop due to her illness.

The doctors at the hospital have recently given Fatema a nerve function assessment and found nerve impairments in her hands and feet. They have now prescribed her with medicine to protect her from further function impairment.

She has also worked as a volunteer for Lepra and over a two year period has referred three new leprosy cases and over a hundred people with potential leprosy symptoms.

Although Fatema works hard to support her family, she is sometimes unable to carry out her work due to her disabilities. Her husband also has fears that their son will become affected by leprosy.

As my husband was extremely anxious about my son’s future, he sent him away from home to make sure he didn’t get leprosy. I couldn’t even touch my own son.

Although life is still difficult, she says

I am very grateful to Lepra for their support with the community groups. I have a dream to one day complete secondary school education, but I first want to overcome the physical and socio-economic barriers.