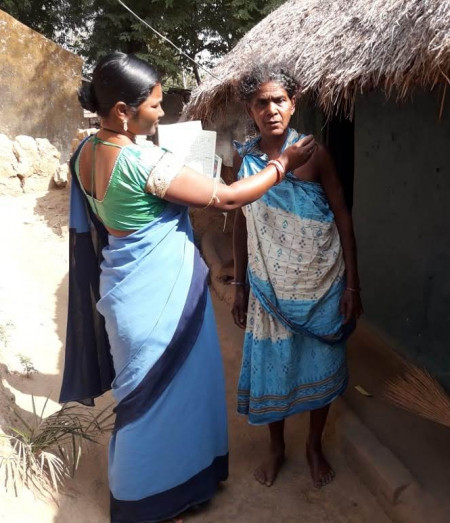 Dasu Bhotra has worked as a Lepra Accredited Social Health Activist (ASHA) for the past 13 years in her home village of Chhatahandi, located in the remote region of Nabarangpur, state of Odisha. ASHAs are voluntary health workers in India who are trained by Lepra to recognise and refer people with symptoms of leprosy and lymphatic filariasis (LF) to medical professionals for diagnosis.

We talked to Dasu about her role as an ASHA and discovered how her work has helped her reach out to the local community as well as build a women’s support network.

Dasu is 35 years old and was born and brought up in Chhatahandi village. Spending all her life in the village, Dasu has a strong connection to the community there. Recognising that most of the local community believed in and visited traditional healers when they became unwell, Dasu felt compelled to train as an ASHA and encourage her community to visit designated health facilities first. Now, Dasu is out and about every day committed to identifying, treating and educating her fellow villagers about leprosy and LF.

With help from Lepra, Dasu learned how to spot the clinical signs of leprosy and LF. She has detected 23 cases of leprosy in her community. Fortunately, there have been no cases of LF.

Lepra has also supported Dasu in providing multidrug therapy (MDT) and the distribution of speciality footwear to those affected by leprosy. She regularly follows up with those who have been diagnosed, making sure they are receiving adequate support from the community and family. Where complications of leprosy occur, Dasu makes referrals to Lepra’s Koraput Referral Centre.

In addition, Dasu has helped Lepra on research surveys and attends the ASHA sector meetings organised by Lepra.

A large part of an ASHA’s role is communicating and building trust. This is key for Dasu as she has fostered a strong support network for women in her village. Dasu tells us:

“All the women trust me and I am in touch with them regularly to enquire about their health issues and then I encourage them to participate in a self-help group.”

Dasu recognises that women are adversely challenged by the disease because of prejudice and discrimination.

“The women are more prone to burning their limbs and face because they cook and also self-stigmatise. They are not willing to report to health facilities, and they are too shy to express their problems.”

Every year Lepra organises film shows to educate and change perception about leprosy across the Chhatahandi community. This has helped to reduce the negative prejudice associated with the disease but still more can be done.  Women do not readily come forward for treatment and choose to focus on livelihood rather than their own health and self-care.  Women in the community continue to approach traditional healers which is where Dasu’s ASHA skills come to the fore. Dasu was awarded “Best Accredited Social Health Activist in Leprosy” from the Hind Kusht Nivaran Sangh (HKNS) for her work in supporting, counselling and helping the Chhatahandi community.

Without ASHAs, many cases of leprosy or LF will go undiagnosed or be without medical support. They are invaluable in our outreach to educate, prevent and provide treatment for remote communities affected by leprosy or LF.

£125 a month or £1500 could train and fund a community outreach worker like Dasu for a year, helping us diagnose and treat more cases of leprosy sooner.