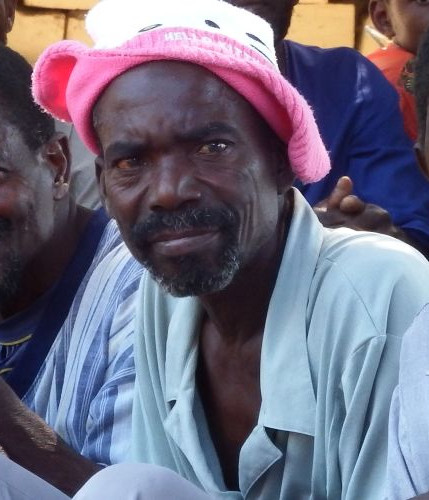 Avelino sits on a log in Nanjoca village, in between the other members of the self-care group to which he belongs. The group is a mix of members with leprosy, LF and other disabilities. They come together to practice self-care for their symptoms. Avelino and his new friends also discuss how they can adapt everyday tasks, such as cooking and working on the land, to make sure they don’t worsen the effects of their disease- by putting protective clothing around their hands, for example. Avelino shares that he has learnt to take regular breaks while working on his farm, to make sure his hydrocele does not cause him more pain.

We are working together with the Netherlands Leprosy Relief in the Zambezia province in Mozambique, to tackle leprosy and LF together in communities where both diseases are very prevalent. Two community members from Nanjoca village volunteered to go to one of our trainings, to understand more about the diseases and be able to help their community prevent the diseases. After the training, the volunteers went around in Nanjoca to unite affected people in a self-care group.

Avelino is a passionate member and often participates in plays that teach everyone about the importance of taking good care of your body. He has signed up for the hydrocele surgery and is now waiting for the next available opportunity to undergo the procedure.

Even though his hydrocele is not yet gone, he says his life has already changed as a result of the project:

“There is a big difference, because before I didn’t have hope that I could get better. Now I have hope.”