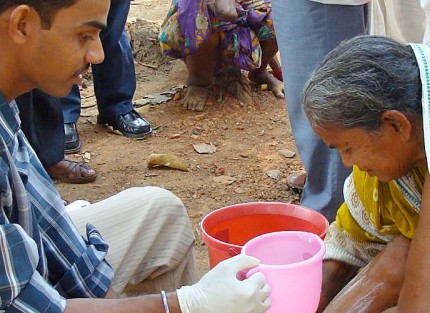 Samastipur is a district in central Bihar in India. It has 7 of the country’s most endemic blocks of lymphatic filiarisis (LF) and leprosy. In 2015 we began a 5 year project to address the needs of those living with LF or leprosy and we are now entering our fourth year of the project.

Over the course of the five years we plan to help improve the lives of 120,000 people (116,000 with LF and 4,000 with leprosy) living in poverty with either LF or leprosy. We want to help them lead healthier, more productive and self-sufficient lives.

We are taking an integrated and holistic approach tackling not just the health issues but looking at the prejudice and discrimination associated with leprosy and LF too. We are doing this by:

Early detection is a big component of the Samastipur project. If people with LF and leprosy are able to get help at an earlier stage it will mean the likelihood of having to live with a permanent disability will be significantly reduced.

In order for us to detect cases earlier though, people need to feel they can come forward and that means reducing the prejudice around these diseases so they feel they can. This is why it’s important to raise awareness through activities and by training our staff to recognise the symptoms.

What have we done so far?

We have had a successful first year in Samastipur getting our project off the ground. We hired 26 great staff members and set up our new offices in the region. As a part of that we’ve taken a wonderful group of women who will go out into the field and talk to people in the community hopefully finding those who may be too afraid to come forward for treatment.

We’ve also worked hard to get all of the right government papers in order so that the public health centres have all they need to start undertaking surgeries for those whose LF symptoms have become so extreme they require operating on.

What's in store for a year or two?

Well, this is where we really get going and can start making a difference. Our counsellors will soon go out and spend time talking to men with hydrocele and their wives about having a hydrocelectomy to reduce this LF symptom. Over the five years we hope to facilitate 10,000 hydrocelectomies. The counselling should help to dispel any myths about it being a dangerous surgery so that more men with extreme genital swelling feel they can come forward for the corrective surgery.

Out of 7 public health centres in the area there are 5 we need to get set up with performing the surgeries so we’ll be talking to them in the hope that we can work together to help more people.

How can you help

Donating just £15 could provide five people affected by LF with vital self-care kits including soap, oil, towels and disinfectant. These are so important in helping them reduce the painful symptoms they experience.