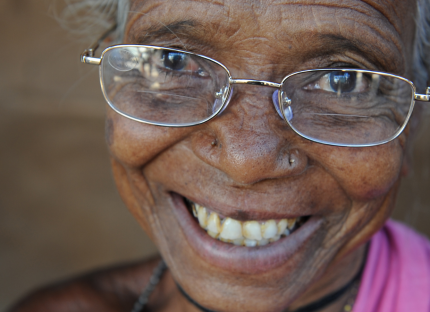 Leprosy can cause vision impairment in a number of ways, often leading to blindness if left untreated.

Left untreated, it can cause nerve damage which may affect the ability of eyelids and face muscles to properly protect the eye from damage and exposure. The estimates from existing surveys reveal that up-to half a million people affected by leprosy could be visually impaired as a result of the disease.

The primary eye-care services provided by Lepra are vital for the treatment of complications due to leprosy. Historically, eye specialists have often been hesitant to attend and treat people affected by leprosy because of the fear and prejudice caused by the disease. Lepra's field staff work closely with their communities to identify those who are most in need and ensure they have access to specialist surgery and treatment.

In 2020, Lepra's eye specialists treated Jay, a student at the Jaipuria Institute of Management in Indore.  Jay had been suffering from leprosy for 6 years, which greatly impacted his education.  He lost sensation in his hand and foot and developed a painful foot ulcer and nerve damage in his hand and left eye.  He successfully graduated however and he applied for various government jobs, took many exams and attended interviews but failed to secure employment due to his health problems.

Jay decided to study further, but was unable to attend all of his classes due to his worsening foot ulcer and eye problems.  This also had a significant impact on his emotional health.  When he visited Lepra’s Sparsh Referral Centre, he was referred for specialist eye surgery to counteract the damage to his eye caused by lagophthalmos, which stopped his eyelid muscles from working.  Before surgery, the lagophthalmos had reduced his ability to blink, and there was a serious risk of him going completely blind.

Jay tells everyone that treatment at the Sparsh Centre is free and that good food is provided too!  He enthuses that the Sparsh Centre is more than just a treatment facility as there is a constant effort to empower people to be self-sufficient.  Jay now wants to work for Lepra to join the fight against leprosy and to support others like him to improve their health and socio-economic status.

India is committed to reducing the cases of blindness by adopting the strategies advocated by VISION 2020 ‘The Right to Sight’, an international initiative to eliminate avoidable blindness. Initiated by the International Agency for the Prevention of Blindness (IAPB) and launched jointly with the World Health Organization (WHO), the partnership now includes more than 60 membership organisations across the globe.