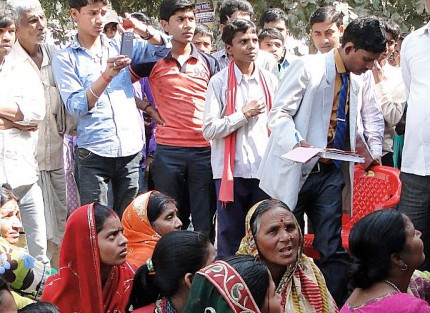 This project in Andhra Pradesh, India aims to educate communities across the state to help reduce prejudice, and detect cases of Leprosy and Lymphatic Filariasis.

The three coastal Districts in Andhra Pradesh – Krishna, Guntur and Prakasam - are endemic for Leprosy and LF and see a high number of new cases every year. Many of those affected already have a disability by the time they are diagnosed which tells us that individuals are not being diagnosed early enough.

There are many reasons why that might be, one of which is the strong prejudice attached to Leprosy. This prejudice is one aspect we hope this project will tackle. By educating communities on the symptoms and treatment we hope more people will come forward to be treated early.

The project will also show people how to care for the affected parts of their bodies if they have already contracted LF or Leprosy by demonstrating self-care practices across the districts. With continued practice the communities will have reduced disability which will in turn improve their quality of life and livelihood opportunities.

This project combines the approaches we have previously used in our LF programmes in Odisha and Bihar with our long-term leprosy work to address the two diseases simultaneously. This project began in October 2015 and will last three years until September 2018.

We hope that by educating communities across the state we will be able to reduce prejudice and detect cases of leprosy and LF at an earlier stage before symptoms are too severe and the condition irreversible.

To do this we are running health education programmes across the three districts to generate more knowledge of both diseases. This will help to tackle the prejudice but will also teach children, women and men what signs to look out for and where to go for treatment.

We are also working alongside local governments to assist in their mass drug administration (MDA) campaigning when it comes to LF. That means encouraging more people to take the vital drugs that could prevent them from contracting LF. Two pills must be taken once a year for five years to prevent the contraction of LF however many people fail to complete the course because they do not receive adequate information on this. We raise awareness in the communities before, during and after the government-run MDA campaigns.

We are also establishing together self-care groups across these endemic areas in order to embed the self-care practices within communities so that when new cases appear people are able to share this knowledge, support and care for those affected without prejudice. We also plan to formalise these groups into a district level network to ensure their voices are heard by the government and their demands for entitlements are timely met...

There are many ways you can help us find those living with the effects of leprosy or LF at an earlier stage.  You can hold a fundraising event in aid of the state of Andhra Pradesh district or you could simply donate. Just £32 could provide a one day training session for 10 people. That includes the vital protective footwear and self-care kits that those affected by LF or leprosy need to care for their affected limbs.

Help us continue this vital work by donating today.