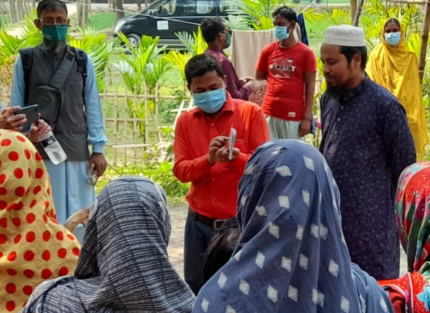 Bangladesh is a priority area in our fight against leprosy and lymphatic filariasis (LF).  As one of the poorest and most densely populated countries in the world, there is a serious lack of access to essential health services, which can leave the most vulnerable members of society trapped in a cycle of poverty and ill-health. Our projects, based across Bangladesh, are in areas identified as most at risk.

In Bangladesh, the government is actively working towards a vision of a leprosy-free country. Collaborative action by non-governmental organisations (NGOs) and the government has resulted in improved health for people and communities affected by leprosy.

However, in 2019, the annual indicators for new case detection showed 22.31 per million population, with the new child detection rate at 4.73 per million population. A further critical indicator showed that grade 2 disability (G2D) among people affected by leprosy had increased in 2019, having previously been in decline, which is likely due to receiving a late diagnosis.

Several factors contribute to the current lack of leprosy detection and treatment:

The Proyash project aims to improve the health of people affected by leprosy through three primary means:

Together with our partners, Effect Hope, we will be working across 11 districts of Bangladesh.

We are taking a two-pronged approach:

Proyash will strengthen referral systems and supply chains for footwear, assistive devices and medication, ensuring that people affected by leprosy can access the services that they need.

The project will provide awareness campaigns across communities to enhance and foster a better understanding of leprosy. This will give individuals and communities greater knowledge so that people with early signs and symptoms can access screening and receive a diagnosis sooner.

People affected by leprosy face significant prejudice and discrimination which prevents them from fully participating in society. This negative perception results in hesitancy in seeking healthcare for leprosy symptoms or diagnosis. The Proyash project will implement strategies with community leaders and members to ensure the prejudices and perceptions are broken down.

To strengthen further the remit of self-support groups, training in continued self-care will be provided. Additionally, federations will receive training in leadership, advocacy, group management, access to livelihood and governmental welfare schemes. Together, these components reinforce the strength of the groups, empowering individuals and communities alike, leaving a lasting legacy of sustainable healthcare.

Throughout the Proyash project, we will be addressing issues of mental health and gender equity.

What impact will the project have?

Working collaboratively with federations and government stakeholders, the project will promote a sustainable impact with long-term benefits to the general community.   Proyash aims to develop a documented and replicable model of leprosy care which is sustainable and can be implemented in other contexts.

How you can help?

Your support can help us continue to grow our self-help groups, to reach and support more people living with the effects of leprosy. A gift of £28 can fund a self-help group for three months, enabling people to join together, learn new skills to help them become independent and fight for their rights.