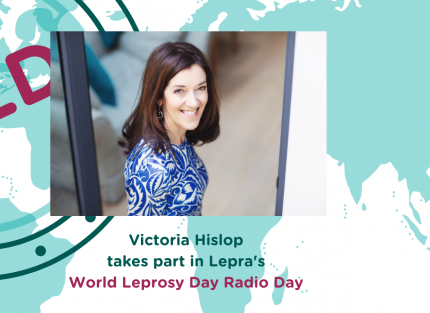 This year, the global leprosy community acknowledged a World Leprosy Day like no other. Lepra staff across India, Bangladesh and the UK came together to celebrate the resilience and strength of people affected by leprosy.

Victoria Hislop, Lepra ambassador and author of the best selling novel, The Island, took part in a series of radio interviews to mark World Leprosy Day.

Listen back on her interviews here

These interviews were kindly sponsored by ION Industries Ltd.

In the UK, Lepra worked with The Royal Family communications team on a small social media campaign to highlight The Royal Family's long-standing support of Lepra. The Duke of Gloucester shared a special message with Lepra staff, acknowledging the hard work of the charity. That can be found here.

Paul Watson, Director of Programmes and Advocacy,  was busy representing Lepra in both a Zoom presentation on Sunday with Luv+ charity, which was promoted across our social media and a television interview in Bangladesh.

The Lepra team in Bangladesh, alongside their television interview, received coverage of their work, with an organised rally in Mohakhali, attended by Dr David Pahan. Read more about that here.

India had a packed calendar of social media promotion, along with rallies, local community events and awareness-raising through their corporate partnerships. Read more about that here.

As it was Lepra’s 97th birthday at the weekend, it seemed only fitting that it was such a successful World Leprosy day. Thank you for your continued support!