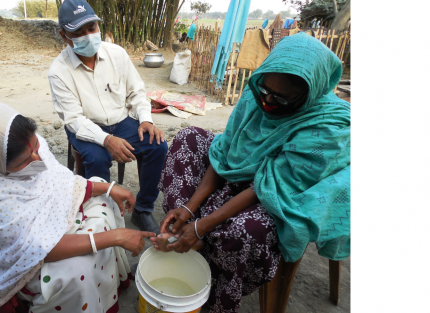 Up to 80% less people coming forward for leprosy diagnosis and treatment in the wake of the COVID-19 pandemic.

Up to 80% fewer people coming forward for leprosy diagnosis and treatment in the wake of the COVID-19 pandemic.

Evidence now indicates that 60 – 80% of new cases of leprosy in India could be missed this year, with only 8,720 new leprosy cases reported between April and September 2020, compared to about 22,000 new cases reported for the same period last year.

It is difficult for people with leprosy to come forward for diagnosis and treatment ordinarily, for fear of discrimination, but widespread lockdowns in India and Bangladesh where Lepra operates, and the temporary closure of certain medical services, has made it even more challenging.

People affected by leprosy face severe discrimination and prejudice in their communities, often isolated from their friends and families. It can be difficult for people with leprosy to access healthcare, financial aid and mental health support.

Geoff Prescott, CEO of Lepra, says, “Leprosy is synonymous with discrimination and inequality. No one is subject to as much prejudice as persons affected.
It is a matter of policy and practice, if you are systematically discriminated against at every turn, then you will suffer extreme inequality. Just like people affected by leprosy.”

Next entry: His Royal Highness Prince Philip Duke of Edinburgh, champion of people affected by leprosy, is remembered by Lepra