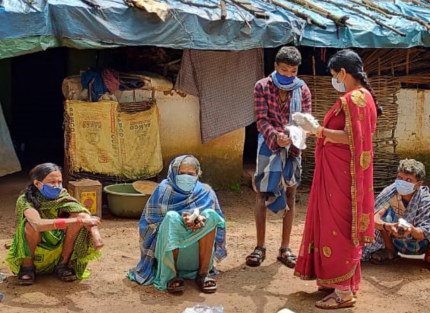 Swabhiman 2.0 - an Active Case Finding and Prevention of Disability Project

Swabhiman 2.0 is a comprehensive project that covers six districts in Odisha, of which the Active Case Finding and Prevention of Disability Project is a key component.

The Swabhiman 2.0 project was due to start under a new operational plan in April 2020 just as India, like many parts of the world, was struggling to respond to the COVID-19 pandemic. This presented major obstacles in delivering planned leprosy awareness and new case detection activities. Lockdowns have limited people to their homes. Public transport has stopped operating, resulting in people affected by leprosy being unable to reach essential healthcare services. On the rare occasion skin testing has taken place, it was difficult to send the swab samples to the laboratory in optimal time. Staff crucial to the project, including the Field Coordinators and Laboratory Technicians, tested positive for COVID-19.

Despite these adversities, the project has found 255 new cases of leprosy across the six districts it covers; this includes 94 women and 25 children who have now received a confirmed diagnosis of leprosy. Over 115 people affected by leprosy have been helped to secure their government pension, which included leprosy-related disability pensions, widow pensions, and other pension for which they were eligible. Thanks to the efforts of project staff, 20 beneficiaries have been helped with housing schemes to support themselves and their families.

A staggering 1,317 pairs of specialised Microcellular rubber footwear have been custom-made by our trained shoe technicians who were able to work during the lockdown, using foot measurements taken prior to COVID-19 pandemic.

The Swabhiman 2.0 project includes three districts new to Lepra – Kalahandi, Nuapada and Bargarh. These are extremely remote districts which are hundreds of kilometres away from the project office in Koraput - an additional factor which makes our outreach and awareness activities difficult at the best of times. Given historic neglect in the areas, we are finding and diagnosing more cases of leprosy, in particular its more severe from, multi-bacillary leprosy. Leprosy can be treated through a course of multi-drug therapy and, if detected and treated early, a person can be cured without there being any lasting damage. Access to treatment and Lepra’s support services are free to all those affected by leprosy.

In addition to providing outreach services directly to communities in remote areas, the project staff helped nearly 250 government health clinics provide appropriate care for the people affected by leprosy who were able to reach the clinic. Altogether the project team saw 1,153 attendees at the government clinics – 577 attending for the first time.

Much progress has already been made in improving rates of early detection of leprosy, but more can still be done. Projects such as Swabhiman 2.0 are crucial to our work in overcoming this disease.