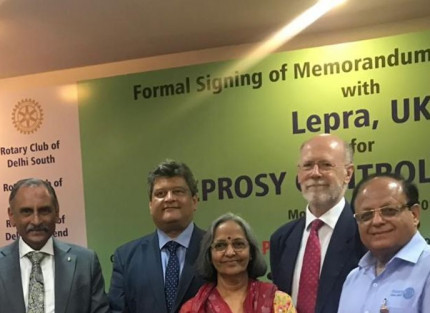 On the 21st of October, Lepra signed a Memorandum of Understanding with the rotary clubs of Delhi South, Delhi Southend and New Delhi. These clubs are members of Rotary International, an organisation that boasts more than 35,000 clubs in over 200 countries.

Despite being curable, leprosy can have a negative impact on people’s lives.

“Leprosy is not going away; we need to work with partners like Rotary, who can help spread the word. We may be starting small, but from small seeds, great things grow. We hope for other rotary clubs to join in the battle. Step by step we need to use partnerships to beat leprosy.”

With the support of the Delhi South, Delhi Southend, New Delhi rotary clubs, Lepra hope to develop our robust active case-finding model so that the incidence of untreated and undiagnosed leprosy decreases significantly across India.

Last year, Lepra screened, diagnosed and treated 40,546 people with new cases of leprosy. It is Lepra’s intention to increase this figure through its new partnership with the rotary clubs of New Delhi and Delhi South.

In order to make this partnership as successful as possible, we would like to extend an invitation to your rotary club in order to help us with our goal to beat leprosy

You can watch our trustee, Nayan Patel's powerful speech outlining the important impact that this partnership will have on our fight to beat leprosy!