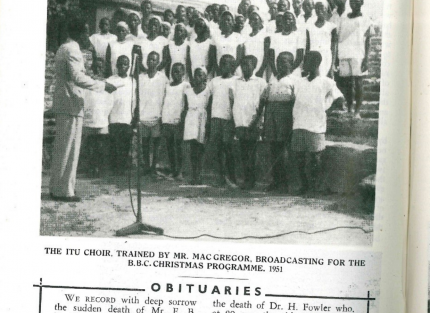 Our expectations may be that Christmas was an irrelevance, or simply a small moment of raised glasses between BELRA doctors, lay workers and nurses, but that was not the case! Christmas was, like here and now, all about the children, and all about having fun. How was this achieved in remote, isolated settlements where movement by patients out of the community was not allowed and where there was yet to be a cure for leprosy? This was an era of slow communications, little spending power and few if any shops. BELRA stepped in financially, with BELRA staff using their ingenuity to organise often unusual Christmas celebrations.

Our Christmas tree was a palm tree, which we left growing in the ground. We made it gay with coloured papers and hung it with gifts. It was something new for the children and they simply could not keep their eyes off it. A wonderful parcel full of interesting things had arrived from BELRA just before Christmas.

While Old Saint Nick might be something we are familiar with in our history and culture, it was something new and unseen in Nigeria of the early and mid-twentieth century! The children were unused to the custom, but Belra doctors were determined to make it a fun and wholesome time of celebration.

Bonganga [a BELRA worker] borrowed an old red dressing gown, made himself cotton-wool whiskers and a beard, and took a sack of presents into the children’s ward. They had never heard of Father Christmas. Smiles turned to frowns, and laughter to shrieks of fear. Little figures burrowed under the bedclothes screaming and crying. Bonganga stopped by the first bed and held out a toy rabbit that had been sent out in a “Wants” box, filled by friends in England for children overseas. The child screamed in terror and beat against the bed.

Bonganga pulled off the moustache and whiskers and threw the dressing-gown on the floor. “It’s me,” he said. “Don’t you recognize me?”

A small girl cautiously peered out, and caught sight of him. “Bonganga, Bonganga” she shouted, “Did you send the witch-doctor away?” 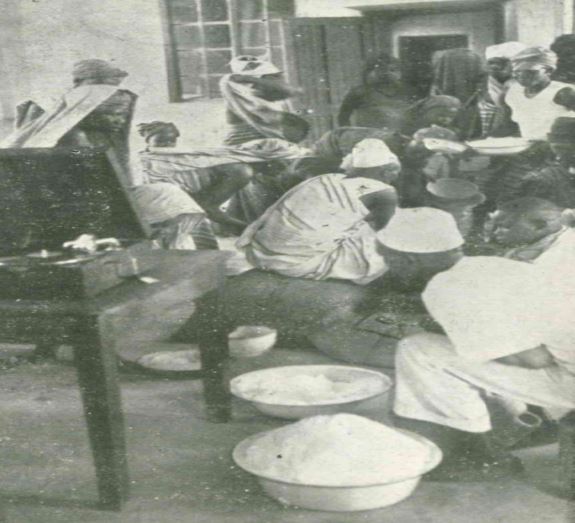 Christmas Day on a BELRA settlement 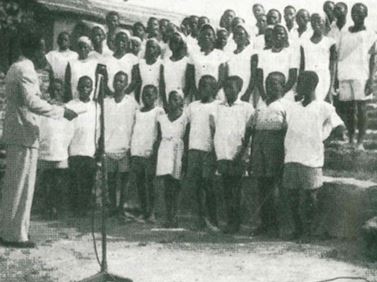 Ikoli Harcourt Whyte, who you may remember from our last history piece and who featured in Lepra News, conducted a choir at Christmas time to celebrate the magic of the holiday! The Itu choir even performed for the BBC, which was warmly received. It is interesting, and comforting, to know that music is the universal language of celebration and love, even in times of great uncertainty and inequality.

Food was a different matter and far removed from tradition. In Uganda, some 2,751 Km away from Ikoli and all at Uzuakoli, Christmas dinner was something of a spectacle! In fact, patients at the leprosy centre were keen for a hearty meal of hippopotamus instead of turkey and ham!

For Christmas, the patients expect me to shoot a hippopotamus for them as they like the meat very much, even better than beef. It is for them one of the happiest times in their lives. Then get them a good supply of bananas to eat with the meat and they don’t wish anything better. It is worthwhile to get them a hippo either by shooting from a canoe or rowing boat or by moonlight on the shore or in the plantations where they can destroy a good deal of food during one night.

BELRA workers were often able to give each patient tea, soap and clothing because of generous donations. It seemed that even in the 1940s and into the 1950s, generosity was a common trait amongst the British people as they repeatedly donated goods and money to the cause of leprosy. The children had clothing, books, toys and pencils, all thanks to donations.

This tradition of giving has continued, even now, as we face into a Christmas unlike any we have faced before. The generosity of you, our supporters, has changed lives in the past and continues to do so now. We are grateful as always and want to wish you a wonderful festive period, filled with family, laughter, joy and perhaps even some hippopotamus!