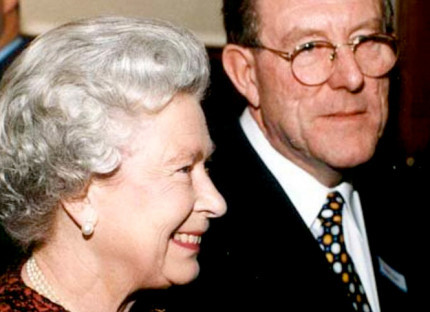 As we move towards Giving Tuesday; an opportunity to unite and support good causes globally, November offers us another chance to reflect upon the importance of working together for the common good; National Philanthropy Day. Following on from yesterday’s focus on our current partner, Pavers; we look back at the role philanthropy played in the past.

From the outset, Lepra’s intentions were clear- to search for a cure, to care for those with disabilities caused by the disease and to restore the lives of people affected by leprosy.

Although there were early frustrations and setbacks, these aims meant we were to be a steadfast, clear-sighted charity worthy of investment; in terms of both money and effort. We were to be organised, systematic, evidence-led and impartial; never favouring one group over another. But how to get off the ground?

Lepra’s first benefactor was Sir Frank Carter, a famous philanthropist. The offer of financial support from Sir Frank, who had previously held ministerial posts in India, put the new association of BELRA (referred to here on in as Lepra) on the map on 31st January 1924. His support brought together Rev. Frank Oldrieve, with his wealth of experience working with the ‘Mission to Lepers’ in India; and Sir Leonard Rogers, a doctor whose leprosy research he had previously funded. Together the three of them saw the prejudice that people affected by leprosy faced, with little attention being given to improving their lives. Described at the time as a ‘progressively debilitating physical condition that will ruin one life at a time, slowly and horribly’ they were determined to fight this sense of isolation and hopelessness. They believed that by combining medical research with care for both physical and mental wellbeing, they could find a cure and fight the discrimination that challenged people affected by leprosy.

A key component of their work would be treating the damage caused by leprosy, particularly ulceration of the feet, and providing rehabilitation for the associated disabilities. One part of this was the development of specialist protective footwear such as those worn by Sempa in the photo above. But the undertaking was going to require a far larger sum of money than Sir Frank Carter could provide.

Maharajahs to the rescue

But where to start raising money? The Mayor of London was persuaded to launch a public appeal to fund Lepra’s proposed work in India, but the result of the appeal was ‘abysmal’: a mere £4,000 was raised instead of the £250,000 that Carter, Rogers and Oldrieve had hoped for. Leprosy was seen as a remote disease and Lepra had not yet developed a way to connect people in London with a disease affecting people thousands of miles away. Despite the massive financial difficulties, Sir Frank Oldrieve set sail for India in 1925, unwilling to let the funding gap delay progress and confident that he would be able to establish Lepra India upon his arrival.

And indeed, his confidence was well placed. In stark contrast to the poor response of the Mayor’s appeal; Maharajahs across India responded to an appeal fund for the establishment of Lepra India, raising somewhere between a staggering £140,000 and £160,000, leading to this comment in our journal at the time:

‘Detractors of charity who are wont to ask ‘why these people don’t help themselves’, might ponder on the fact that the Association’s work in India flourished for thirty years as a result of local generosity, while it took over forty years to raise a similar sum in a single year at home (Britain).’

This provided real clarity regarding the future funding of Lepra; rather than relying on the flow of funds and manpower from Britain; both the national governments and local communities of leprosy-endemic countries were going to be of crucial importance for fundraising and the creation of a workforce.

The importance of radio.

On 19th June 1938, Lepra discovered an innovative new fundraising tool; the radio. The Sunday broadcast of Christopher Stone launched an appeal that dramatically raised our annual income from a not inconsiderable £7,000 to an astounding £20,000. The appeal received support from all quarters; from Kashmir and Assam, to Yatung in Tibet. Toc H, a church organisation, joined Lepra, providing lay workers to help those affected by leprosy, and became part of that radio appeal.

“Toc H,” Stone said, “works with it [Lepra] wholeheartedly.  Last year 208,000 doses of life-saving anti-leprosy drugs were sent, and that’s something – but awfully little, really, when you know that there are three million lepers, at least, and that each one needs two injections per week for several years, and when you know that at last, after all these centuries of horror, lepers can be cured, and leprosy stamped out; this is a holy war if ever there was one.”

The response to this appeal was overwhelming, with a far wider section of the public becoming acquainted with the work.

Stepping up to volunteer

The advent of the Second World War provided another fundraising challenge for Lepra, but the encouragement of philanthropy saw ideas flowing; “For Brighter Blackouts take a Lepra jigsaw puzzle to your shelter” and 'Night Without a Siren – a penny to Lepra.' Considering the difficulties faced by the British public at the time, the activity of volunteers was remarkable, with annual youth rallies organised to raise interest in leprosy amongst the young in Britain. One specific fundraising idea was to collect coins bearing a date ending with a nought, such as 1910, 1920 etc. There were also bring and buy sales; people with collecting boxes out on the streets; photographic exhibitions and many more events. There was even a ‘Children’s Corner’ created for children under 14 to join. These groups were all successful fundraisers, with the under 14s raising enough to sponsor a child for the Adoption (Sponsorship) Scheme.

The World War also fostered a sense of unity across the globe; our journal records that people affected by leprosy living in Hawaii sent funds to those people similarly affected in China.

Personal donations by the Royal Family have also been a constant throughout our history, with at least 4 members supporting the Children’s Fund in the mid-20th century. Attending the premiere of Uncle Silas in 1947 the Duke and Duchess of Gloucester were photographed with the ‘well-spoken starlet’, Jean Simmons, to promote the Child Adoption (Sponsorship) scheme. An announcement of the Royal Family’s involvement in the scheme was made at the premiere to great fanfare, with the following report announcing its success.

“This splendid news has been a real help to the Child Sponsorship Scheme. The first half of this year produced only 100 sponsorships, but in the six weeks following the announcement, over 100 more children were sponsored. We trust that the Royal example will encourage hundreds more sponsors to come forward.”

Giving Shoesday is a natural progression of Lepra’s fundraising. The use of photos, like the one of Sempa, continues to be a pivotal way of communicating the difference made to the lives of people affected by leprosy. Capitalising on current methods of communication, like our pioneering radio appeals in the 1930’s, is reflected by our involvement in social media campaigns like Giving Tuesday. Harnessing the ‘star power’ of celebrities to raise awareness continues today; demonstrated by the kind donations of celebrities to our Giving Shoesday online auction. We may reach out through the internet; via our website and social media, through videos on YouTube and blogs on LinkedIn. But we maintain our connection to the philanthropic fundraising so vital to the establishment of Lepra; raising awareness and monies via talks in churches and schools across Britain, and with individuals such as Tom Barton undertaking personal challenges to raise funds.

We continue to look to our partners in India, Bangladesh and Zimbabwe, supporting them with funds and sharing our expertise.

Next entry: The Obituary of Professor Indira Nath