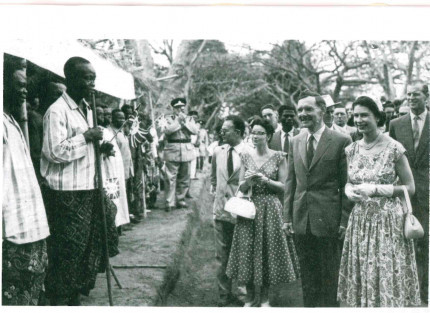 Lepra has enjoyed royal patronage since the involvement of the Prince of Wales in 1926. This was succeeded by George VI and then Her Majesty Queen Elizabeth II who remains Lepra’s Patron. As a girl, the then Princess Elizabeth had taken an interest in leprosy as early as 1947 when she was one of the first Royal child sponsors in our now-closed child sponsorship Scheme (1974). The Queen’s cousin, HRH The Duke of Gloucester, is also our very active vice- president.

Lepra greatly benefits from the patronage of Her Majesty the Queen and His Royal Highness the Duke of Gloucester. The latter for example regularly attends Lepra events. In 2020 for example, he was a guest of honour at a Parliamentary reception at the Houe of Lords and in 2019, at an event in Duxford.  Twice since the COVID-19 pandemic struck this year, The Duke of Gloucester has been in touch enquiring about the welfare of staff and the circumstances of the people affected by leprosy.

Over the years, workers from Lepra had many interactions with our Royal patrons. Dr Arthur Garrett, who spent 18 years working in a leprosy settlement at Oji River in Nigeria, recorded a visit by the young Queen and her husband, Prince Philip in 1956.

“We were always in dire financial straits at Oji River and had recently had our usual grant cut, so the Queen’s visit not only did us great honour, but the government provided us with extra funds with which we could honour her. The hospital benefited, with fresh paint on the walls, new beds with sheets and the school and handicraft centre benefited from the funding too”.

International visits were a common occurrence for the Royals, and in 1965, Princess Margaret and the Earl of Snowdon visited a children’s settlement at Kumi, Uganda.

“The proceedings were over, however, the Princess and her husband did not step into their car, but informally and deliberately went over to greet the children more intimately. This was not pre-arranged. The characteristic smile and the friendly wave as the car departed in the morning sunlight made us feel once more that we have a Royal family that responds to human need instinctively, and always with quietness, dignity and charm. It was indeed a day to remember”.

From Lepra’s perspective, there are many benefits that Royal support brings. It encourages staff, motivates volunteers, provides credibility and inspires confidence among supporters.

Across the world, leprosy remains astonishingly unpopular among governments, health services and institutions. There remains official and social prejudice, leading to deliberate, underreporting, denial of disability benefits and chronic underfunding. That members of the Royal family have consistently identified with one of the world’s least popular causes should be applauded.

Lepra remains very proud of our Royal patronage and the many opportunities it has afforded us in changing people’s lives and helping to beat leprosy.