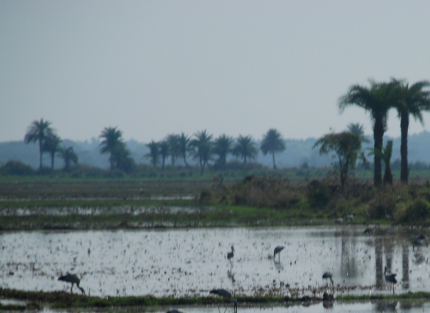 Tropical cyclone Jawad caused major disruption across the states of Andhra Pradesh, Odisha, and West Bengal in early December 2021. Whilst bringing heavy rainfall and strong winds over these areas, the cyclone caused significant devastation to the people supported by Lepra and the programmes it delivers.

In the state of Odisha, strong winds and torrential rain lashed down on remote, fragile communities causing much damage and destruction. As a result, many people affected by leprosy or lymphatic filariasis (LF) were significantly impacted, losing their personal belongings as the cyclone wreaked its havoc.

Lepra instantly implemented an emergency response to help the most vulnerable among the people affected by leprosy and LF. Our teams in Puri and Nayagarh, two of the most devastated districts, began primary support immediately. However, it soon became clear more help was needed.

Following the aftermath of cyclone Jawad, 83 pairs of micro-cellular (MCR) footwear were supplied, with a total of 1000 pairs to be distributed to those who are critically in need.  This free specialist protective footwear is vital for people who are disabled and living with the effects of leprosy and LF. Losing their specialist, life-changing footwear due to the cyclone is simply unimaginable.

Sixty self-care kits have already been supplied, with up to 1000 to be distributed in the coming weeks. These self-care kits contain items that help people affected by LF to care for their wounds and ulcers, and are critical to preventing further damage. Items such as anti-fungal cream, antiseptic lotion, petroleum jelly as well as soap and towels, all help to soothe and keep wounds clean from further infection. Such kits are an essential component in the promotion of self-care and nevermore so needed than in a wake of a cyclone.

Throughout Lepra’s response to cyclone Jawad, we have faced the added burden of COVID-19 continuing to spread across communities with the Omicron variant gathering pace. Our teams in Odisha have provided 200 PPE kits to communities affected by the cyclone, as well as promoting good COVID-19 prevention techniques.

In addition, 200 educational kits have been distributed which include notebooks, stationery, and bags to children who have lost their belongings as a result of the cyclonic storm, ensuring that they can continue with their education after such a traumatic experience.

It is testament of the determination of people from the cyclone-affected communities that they have put themselves forward to volunteer in helping with our emergency response. Working closely with local block and district administrations as well as Panchayati Raj Institute members, a local self-government of villages, Lepra’s aim is to always help those people who affected by leprosy and LF.

With thanks to generous donations from you, our Lepra supporters, we were able to respond quickly and swiftly as the situation unfolded last month.