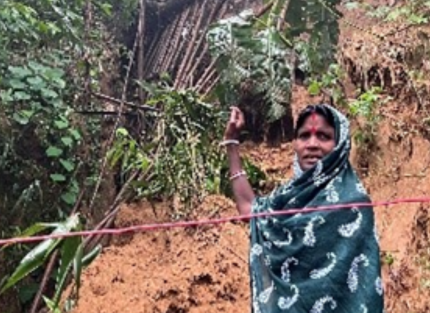 Bangladesh is prone to annual flooding but the level of disaster brought by the floods in June was exceptional, and the worst seen for a century.

Sylhet in north-east Bangladesh, is a priority area for Lepra, with projects such as CHAI (Community Health and Inclusion), helping to address the needs and gaps in the poorly funded and under equipped health system structures. Poor case detection and the lack of early treatment has led to an increase in disabilities caused by leprosy, which in-turn has a significant impact on people’s emotional wellbeing and ability to maintain employment.

Sylhet suffered some of the worst flooding in June. Families displaced, livelihoods lost, an already vulnerable population who were disproportionately affected by the pandemic, are now facing further hardship at this delicate time of recovery.

Thanks to the kindness and generosity of Lepra’s army of loyal supporters, we are able to respond rapidly to the unfolding humanitarian crisis, ensuring that the people affected by leprosy and lymphatic filariasis, the people in the greatest need, have the support and infrastructure required to overcome such challenges, as the unprecedented flooding continued.

Lepra’s Country Director, Dr David Pahan, recently visited the region to see first-hand Lepra’s humanitarian response, and to visit some of the people affected by the floods.  On 28 June, Dr Pahan attended an advocacy meeting with 82 people affected by leprosy, along with Sylhet’s Civil Surgeon and several other senior public health officials.

During the meeting, Dr Pahan was able to discuss the ongoing crisis and find out first-hand the scale of the issue. Many areas remain seriously flooded and inaccessible, and people were struggling with a lack of food and clean water, homes have been damaged or destroyed, livestock and livelihoods lost. A particular issue for people affected by skin diseases such as leprosy, is the risk of further infections because of the floodwater, particularly fungal infections and scabies.

In response, Lepra are helping to provide immediate financial support to people affected, to help lessen the hardship caused by a lack of income.

Working with local government and health officials, we are helping to identify and advocate for people needing further medical assistance and longer-term support, to help facilitate physical, financial, and psychological recovery.

We are also working with other NGO’s such as the Human Relief Organisation, to ensure the provision of food aid and menstrual hygiene kits for the communities Lepra support.

Lepra will also be supporting a longer-term plan of recovery for people affected in Sylhet. This will include further health system strengthening, training, advocacy and health management through our existing projects and programmes in the area.

Perhaps the real success story during the disastrous flooding in Bangladesh, has been the incredible willingness of organisations, NGO’s, local government and healthcare, to work with the community to respond to the unfolding crisis.

A wonderful example of the community’s effort during the flooding has been the amazing Shumon, the secretary of Pabna District Federation, who’s own personal story can be found in Lepra News Spring 2022. Shumon and his team have been leading efforts on the ground to provide food aid and emergency support to the most vulnerable members of the community.