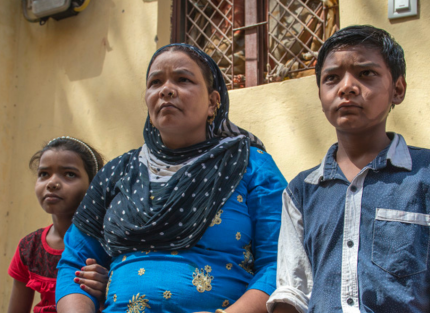 We will overcome leprosy together: Lepra and University of Essex Partnership Launch

We will overcome leprosy together

Professor Mariachiara Di Cesare, Professor in Population Studies and Global Health and Director of Institute for Public Health and Wellbeing 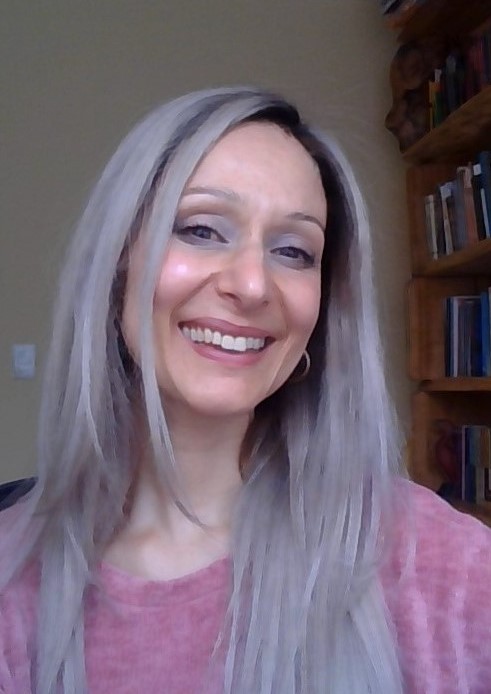 Alice Cruz is the first United Nations Special Rapporteur for the elimination of discrimination against people affected by leprosy and their families. She is is a Portuguese anthropologist with a PhD in sociology and post-doctoral research in human rights. She was external professor at the law school of the Universidad Andina Simón Bolívar – Ecuador, visiting professor at various universities and a researcher in the University of Coimbra – Portugal. She has developed in-depth fieldwork in different countries of the European, African and South American regions on topics such as oral history, history of medicine, public health, global health, maternal health, intercultural health, science studies, disability studies, gender and human rights. Throughout her work, she has engaged with several social movements, especially in the field of health and human rights. 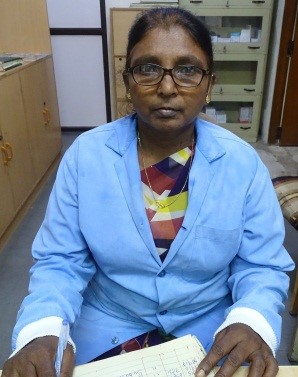 Manikyamma Kummarapalli was diagnosed with leprosy and received treatment in 2000. She is presently working as laboratory technician at LEPRA Blue Peter Public Health and Research Centre, Hyderabad, India.  She helps in the registration of the cases and assists in  sample collection for leprosy patients. She provides services in the outpatients department registration, medical records section, pharmacy, limb care to the affected persons, active case finding activities, community mobilization for research work and in house-keeping. 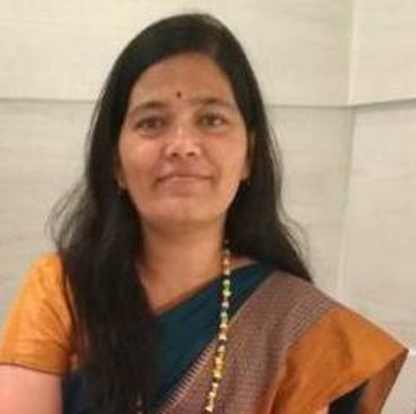 Aparna Srikantam is a medical doctor and laboratory specialist with a passion for research in leprosy and LF. She heads the research programme at LEPRA, India and currently chairs the NNN DMDI cross cutting group. Her research interests include leprosy early detection and disability prevention. She carries out applied research on chronic wound management, point of care molecular diagnosis and antimicrobial resistance in leprosy with several research studies and publications to her credit. 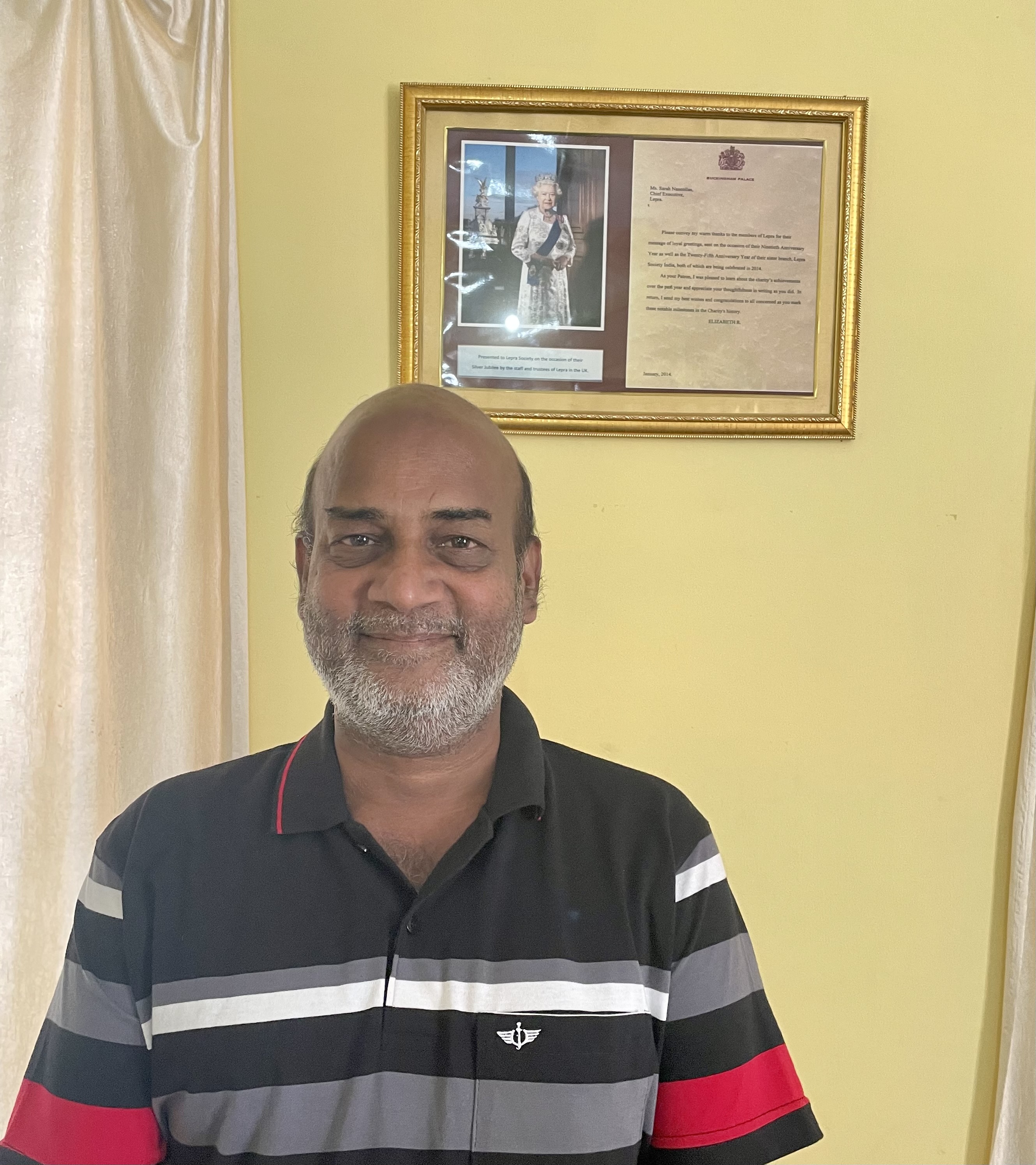 Rajni Kant Singh holds a master’s in international public health (MIPH) from the Liverpool School of Tropical Medicine. Rajni was himself impaired due to lymphatic filariasis (LF) and has faced the medical, physical, mental, and social challenges that this involved.

Rajni represents Lepra (UK) and LEPRA Society in various national and international forums. He is also the State Coordinator of Bihar, Jharkhand, Delhi and Uttar Pradesh States in India.

He has extensive knowledge and experience in the field whilst working with various government, quasi government & INGOs, stake holders and other agencies. Rajni has strong technical knowledge in thematic issues such as leprosy, TB, HIV, lymphatic filariasos and kalazar. 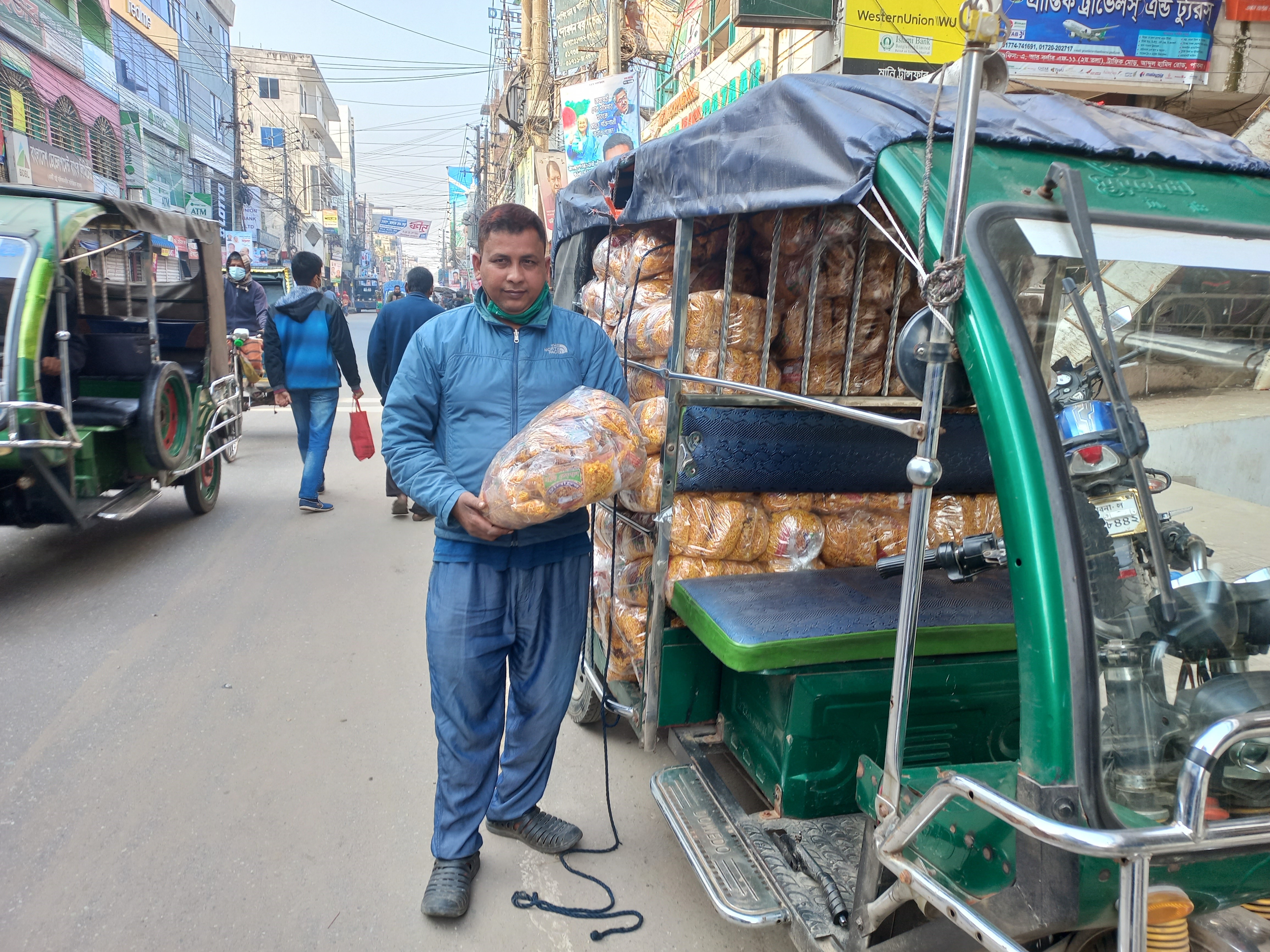 Shumon first noticed symptoms of leprosy around 22 years ago and visited his village doctor on numerous occasions. Because the doctor was not trained in spotting the signs of leprosy, Shumon was not given multi-drug therapy (MDT) or suitable follow-up care which could have prevented his condition from worsening. In 2006, Shumon’s friend, a rickshaw driver who had himself been successfully treated for leprosy, noticed his deteriorating condition and suggested he visited the Pabna Sadar Health Centre. Lepra specialists examined Shumon and diagnosed leprosy. Because of a lack of early treatment, Shumon was suffering with significant injuries to his feet. Lepra immediately referred him to Nilfamary Hospital where he was admitted for extensive operations, 6 months of post-operative care and MDT to treat and cure him of leprosy. Shumon’s disabilities however, left him unable to continue his employment as a farm worker. He was left with no income and was struggling to feed his family.

As part of his care package, he was referred to a local self-support group (SSG) where he was given financial assistance to help him fulfil a dream of starting his own business. In the spring of 2014, Shumon opened his first grocery shop, which soon gave him over 150 customers a day. This has enabled Shumon to grow his business and he now employs 15 people, including several who also have disabilities as a result of leprosy.

With the help of Lepra, Shumon has taken a leading role in the development of a new district federation in Pabna, so he can help others in the way he was helped by his local SSG. Most recently Shumon, together with 6 other businessmen,  has been raising money for the Sylhet flood victims, continuing his inspiring work to support people affected by leprosy. 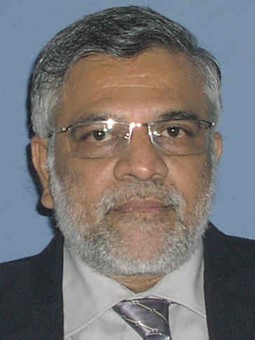 Dr Venkata Ranganadha Rao Pemmaraju is a medical professional who has been working in the field of leprosy for four decades.

He started leprosy control work using Dapsone mono-therapy with the German Leprosy Relief Association. He worked in the Indian army for 5 years and was later associated with LEPRA India for over two decades. Currently, he is working with the WHO as Acting Team Leader of WHO Global Leprosy Programme.

He has published 28 articles and reports and has contributed to leprosy chapters in the IAL textbook of leprosy and publications on leprosy. 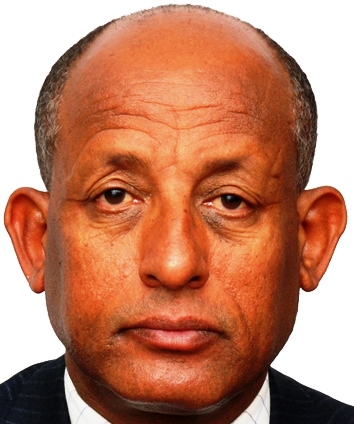 An Ethiopian national surgeon with over twenty years clinical experience in morbidity management and disability prevention of people affected by Echinococosis, Trachoma, Buruli Ulcer, Leprosy, Podoconiosis and lymphatic Filariasis. Between September 2016 and July 2018 Asrat worked as an Executive Director, National Podoconiosis Action Network, Ethiopia. This network brings those working on lower leg lymphoedema throughout Ethiopia. Asrat been with Amref Flying Doctors as a reconstructive surgeon (worked mainly on physical rehabilitation of people with disabilities) from 2003 to 2016, in fourteen African countries. He has also been with All Africa Leprosy Research and Rehabilitation Centre (ALERT), Addis Ababa, Ethiopia between 1995 and 2003 worked in the field of Surgical, Physical and social rehabilitation of people affected by leprosy and other Neglected Tropical Diseases. 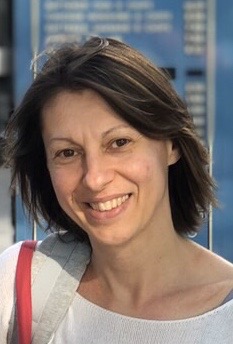 Milena Simic is a researcher with nearly two decades experience of working with evidence for health action with marginalised groups. Although she worked on evidence reviews, it is the first-hand experience in qualitative and quantitative evidence creation that keeps her coming back to this field. 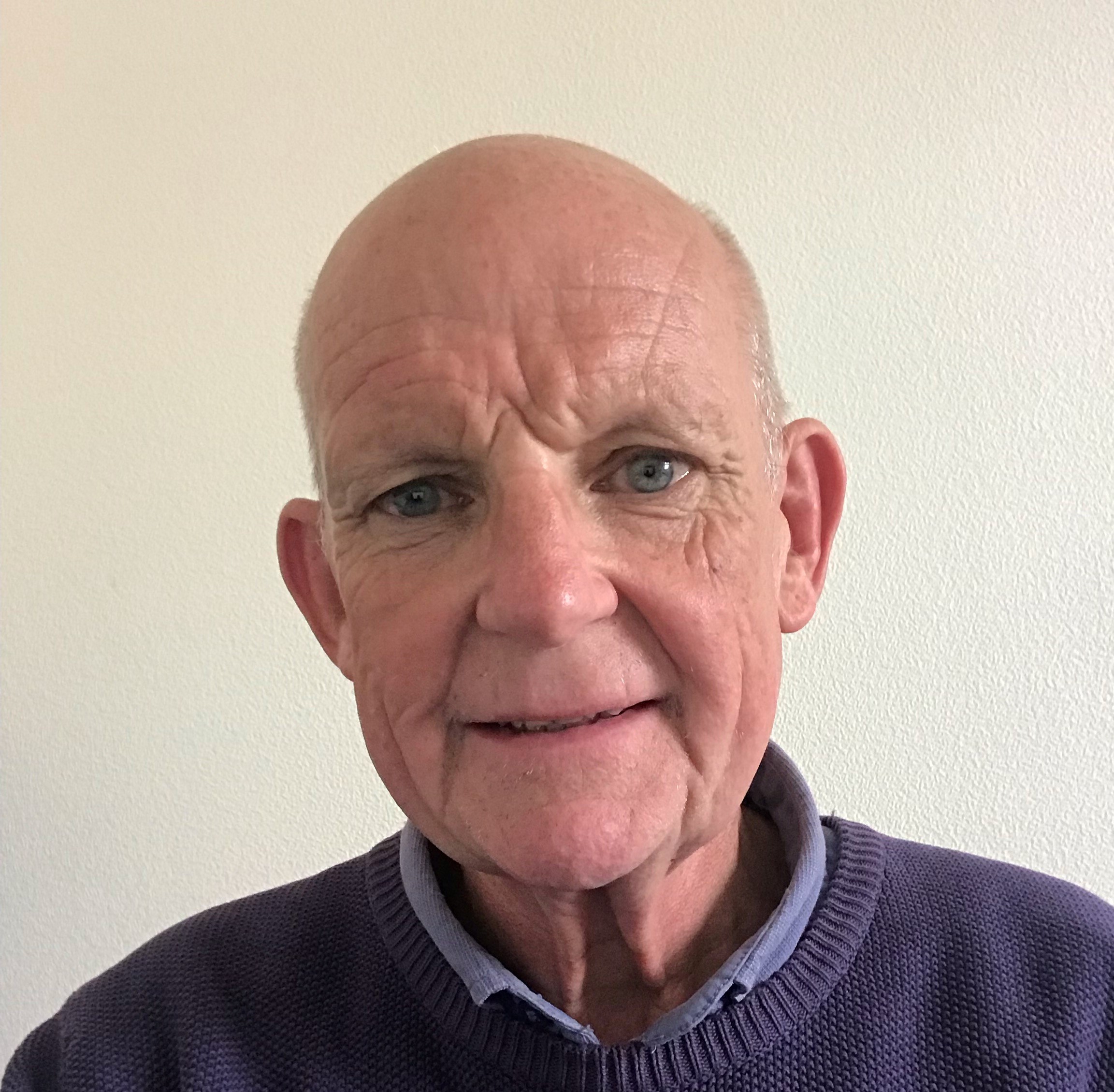 Andy Ramsay is the Senior Research and Technical Advisor on Leprosy and Lymphatic Filariasis Control at Lepra, UK.  He has an MSc in Clinical Parasitology from the London School of Hygiene and Tropical Medicine and a PhD in Public Health from the University of Amsterdam. He has extensive experience of living in low and middle-income countries in Africa, Asia and Latin America. and working in tropical/infectious disease control programmes, biomedical and public health research, and epidemic response operations.    He served as a senior scientist for 12 years in the UNICEF/UNDP/World Bank/WHO Special Programme for Research and Training in Tropical Diseases (WHO/TDR) in Geneva, and has worked for both the London and Liverpool Schools of Tropical Medicine as well as the Oxford University/Wellcome Trust Tropical Medicine Research Units in South East Asia.  He is an Honorary Professor in Infection and Global Health at the University of St Andrews Medical School, Scotland, and Adjunct Professor in Tropical Disease Research at the WHO Collaborating Centre for Tropical Diseases, National Institute for Parasitic Diseases, China. 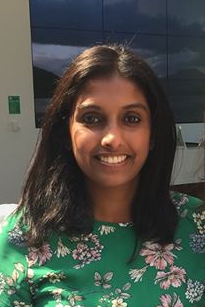 I am a final year PhD student, and my PhD focuses on the lived experience of disabled entrepreneurs in Sri Lanka. The aim is to capture the diversity of their experiences; identify barriers, focusing on ability rather than disability and give voices to those who are silenced and under-represented in our disablist society. To fully reflect the experiences of disabled people, I involved disabled from the outset to formulate my research focus.  I am also working as an Associate Lecturer at the University of the West of Scotland. I was diagnosed with Leprosy in 2010. Stigma and discrimination I experienced prompt me to undertake my PhD studies on disability.

Next entry: 30 years of regular giving: helping people with the highest level of need