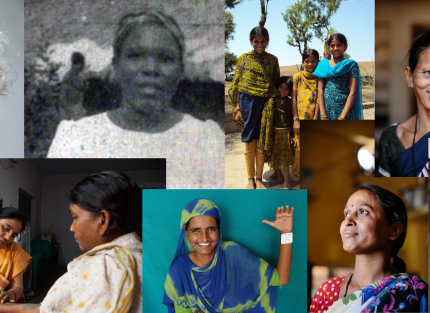 International Women’s Day - a celebration of women with leprosy

Culturally and mentally, the experience of women affected by leprosy is often very different from that of men.

Women are at higher risk of domestic violence, isolation and prejudice after a leprosy diagnosis. Many women actually delay coming forward, due to the fear of not being able to get married or being rejected by their families. In a society where women are dependent on their parents or their husbands, a leprosy diagnosis can feel like the end of the world. Physical disabilities caused by leprosy can wreak havoc on a woman's sense of self and ultimately, her place in the community.

The World Health Organisation says that research into the gender gap of leprosy sufferers is scarce. It is likely that accessibility, like the long distances between communities and specialist clinics, and cultural factors such as women's role in the home and their responsibilities within the family unit, leads to a lower level of diagnosis amongst women. Lepra's experience of treating women with leprosy has shown the effectiveness of our Active Case Finding (ACF) and our approach to treating women with respect, dignity and compassion.

In Lepra's ACF teams, who visit communities and homes to test people for leprosy and offer advice and support, there is always a man and a woman present, to narrow the cultural divide that can cause women affected by leprosy not to seek treatment. Women are at ease and treated with respect and dignity. At Lepra, the heavy burden women carry as they raise children, look after the home and play a pivotal role in their communities is well understood.

Women like Chilakamma, who was diagnosed with leprosy at 40 years of age and was subsequently abandoned by her husband, understand all too well the damage leprosy can do to your entire life.

I had to raise my children alone. My sons, they moved away and didn't want anything to do with me. I worried I would not be able to see my daughter get married, because of my leprosy diagnosis scaring men away from her.

Chilakamma was able to turn her life around with Lepra's support, and has a job now, as well as referring other people affected by leprosy to specialists at Lepra.

Lepra has a long history of strong, independent women, who both seek treatment and act as specialists or community champions.

Janet, a leprosy sufferer who resided at Lepra's historic settlement in Nigeria for 12 years, was released in 1952. When she arrived at Lepra's settlement seeking treatment for leprosy, she was just 8 years of age! During her time at Oji River, Janet became a focal part of the community and was employed to be the Girl's Compound Mistress, tasked with caring for the young girls affected by leprosy who lived in the settlement.

Despite having leprosy, Janet was extremely talented at practical work like sewing, knitting and crafts making. She was responsible for feeding over 400 people, three times a day; no light task in a settlement of that size.

Janet also worked as the Choir Leader, and as the Guide Leader for the entire community. Janet leaves no small place to be filled in Lepra's history.

Lepra supports all kinds of women and has continued to in those 67 years since Janet left the Oji River settlement. So much has changed for women around the world, and yet, sadly, for some women affected by leprosy, time has stood still. Despite being technically illegal in India, some women are still divorced or abandoned by their husbands for having leprosy. Some women are even forced to leave their homes, communities and children to seek safe, effective treatment.

Lepra will continue to do everything it can to create safe, accessible spaces for women affected by leprosy to access medical treatment and general support. There is no equality until women are treated fairly. Lepra's commitment to helping women like Chilakamma, and teaching women like Janet to be strong, independent leaders, will continue.

Next entry: From the archives: Mother’s Day