On International Nurses Day, we look at Lepra nurse practitioners through the eyes of Mary Seacole, a world-renowned nurse practitioner herself, pictured here. And we ask the question: would she have approved of our Lepra nurses in the 20th century? Like many of our Lepra nurses, Mary had no formal training but relied on her skills, her abundant warmth, and the remarkable depth of her humanity which she brought to each patient.

Lepra’s nurse practitioners had often recovered from leprosy themselves and had stayed on in the leprosy settlements. This experience of leprosy that they shared with their patients can only have increased the compassion and warmth they felt and added to their own resilience. Like Mary, they threw themselves wholeheartedly into pioneering work, bringing hope, healing, laughter, and self-reliance. Let us see some of these nurses.

Lydia Grainger, pictured here as a pioneering nurse in Nigeria, spoke vividly of her nurse practitioners after trekking miles with them to our clinics: 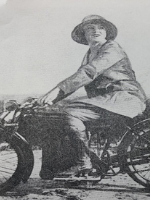 Let us watch John, the head nurse for the clinics, dealing with the tenderness of a woman with those suffering from leprosy who have been ostracised by their own people. Mark his patience in facing the truculent and his readiness in arranging transport for the destitute to our hospital. No cry goes unheeded but with tact and firmness he carries out each day’s duty. Then there is Hannah, one of a fine staff of nurses from our clean baby nursery who are being trained by Mrs Ross, the wife of our second doctor.

I had been told, upon my arrival in Sudan that my survey work would be among the Bari tribe. It was recommended that I study the language with the help of Andrea Sulle (below), a Bari, and who was to become my indispensable assistant and interpreter. Wounds, such as a cut, were dressed by Andrea and the procedure watched with as much interest as if it were a major operation. The psychological effect having as much, if not more, curative effect than did the treatment itself.

The picture of Lepra nurses is further enhanced as we move into a later decade, and through the eyes of a journalist, see that Lepra nurses, alongside doctors, had a huge impact in Malawi, East Africa.

Lepra has changed the meaning of leprosy in the Southern Province of Malawi. You could describe it as a quiet revolution – a change in the attitudes of leprosy sufferers, in medical assistants like Andrew, and a successful method of tackling this dread disease. The numbers of leprosy patients in the area have dropped so far, and so many nurse practitioners now have leprosy training that Lepra can soon move away from the south and confidently let the work be continued in the ordinary village medical clinics.

But now we hone in on one individual whom Mary may well have regarded as a fellow traveller and whom we featured on Global Love Day because of the depth of his compassion. Ben Onyekwere is perhaps the nurse most akin to Mary Seacole in Lepra’s history as he trekked to the most afflicted in the hardest to reach areas. And he went alone, as did Mary. Ben gained a reputation for being highly effective in the most difficult areas, where prejudice was rife and the patients were overwhelmingly frightened and utterly miserable. His charisma and authoritative demeanor started to work wonders on those with leprosy, and their lives started to improve dramatically.

For the most part, we can be sure that Mary Seacole would have approved of the care and attention given to our leprosy sufferers by Lepra nurses. Nurses play such a crucial and irreplaceable role in healthcare across the world. As far back as Mary Seacole, and Florence Nightingale, we see the work nurses do to ensure excellent care of patients no matter their ailment. Lepra's nurses, and their modern counterparts ASHAs, care for people affected by leprosy without judgment or discrimination. They treat people with care and respect. This is vital in a world where persons affected by leprosy are isolated, alone, and afraid.

We will continue to honour the role of nurses and the work they do to improve people's lives, especially the most vulnerable in society.

Next entry: An interview with Dr Charlotte Roberts