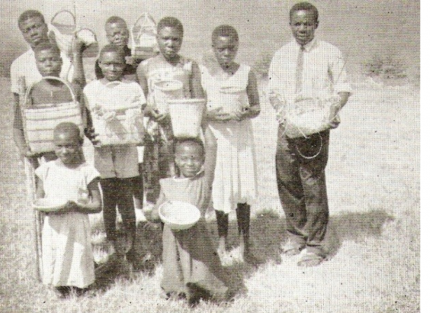 On International Children's Book Day, Lepra is taking a look at the history of leprosy settlements through children's eyes. Growing up as a child with leprosy can be a difficult experience. Children can struggle to stay in school and continue their education, because of disabilities associated with leprosy and the social isolation and prejudice they face from their friends and family.

This year, Lepra has delved deep into our archives to learn about the lives of children affected by leprosy throughout the 20th century. These are their stories, written as personal, intimate diary entries, based on historical archives. 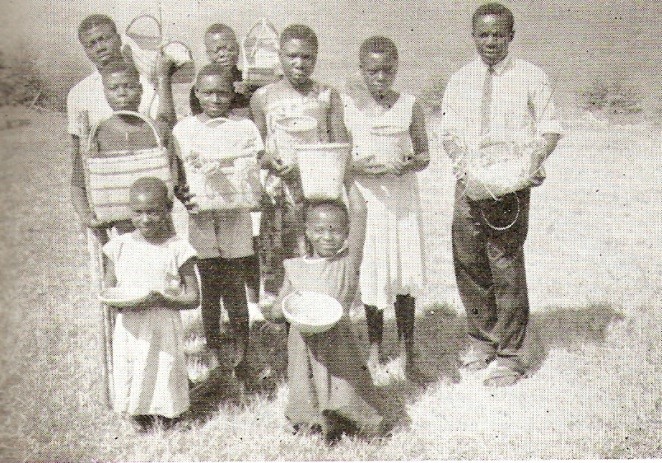 See me at the back of this photo, on the left? I’m not smiling and I’m not so young- probably your year 10 age group. But I’ve had a tough few years and I’m just turning my life around now. I really care about the basket I’ve made in this photograph because it took grit and determination. “Come off it!” I hear you say, “Don’t tell me that took grit and determination.” Well, it did. And here’s why.

My name is Machebe,  Brian Machebe, and I come from a hot country, Cameroon. I loved school and was great at football, top at Maths, and I had a playground superpower: I could be pricked with a pin or needle on a certain patch on my arm and it wouldn’t hurt! I showed my superpower off to my elder sister who told my Mum. I visited a specialist who was a sweet woman and she diagnosed me with leprosy immediately and sent me home with medicine. I thought my troubles were over.

When my father, teacher and school friends heard it was leprosy, my life went downhill. My dad banished me from the house. He refused to touch me and washed his hands a lot. My teacher did the same and even wrote to my mother about me. My school friends bullied me and excluded me from activities. They had all abandoned me because of my leprosy diagnosis.

The doctor sent me away, to a special place to be cured. I lived in isolation, surrounded only by doctors or people like me who had leprosy. I spent years in the settlement, away from my family and friends, but I am almost cured now.

But what of the photo? Why is making a basket so special to me? Because a cure is one thing, but the disabilities from the disease are quite another! My hand is damaged from leprosy, and  I struggle to use it. But my teacher at the Lepra settlement helped me. I’m on the way to a cure, but I’m not there yet. I need to get back home first.

Here I am with my hand up at the front of the class.

My childhood was tough, but I try not to dwell on that. People think they should feel sorry for me, but pity is wasted on me. I'm almost 14 and I'm receiving treatment for leprosy. My days are filled with normal things like school, play, homework and food! This is my new normal. I’ve got a brand new family – my leprosy family. We are all young, busy and we are not letting leprosy ruin our lives. Once we are cured, we are off!
We don’t have time to dwell on our troubles. We’re too busy being us – being kids.

My name is Odinwa, meaning ‘little bud’ and mine is not an easy story. My story is not of overcoming disability brought on by terrible circumstances, nor is it a story of overcoming leprosy (though I did this too). It is instead, a story of strength and courage and finding happiness in bad circumstances.

My mum loved me. We were never separated. We slept together, worked together and I played at her feet often. The weather here can be very hot and so we used to sleep 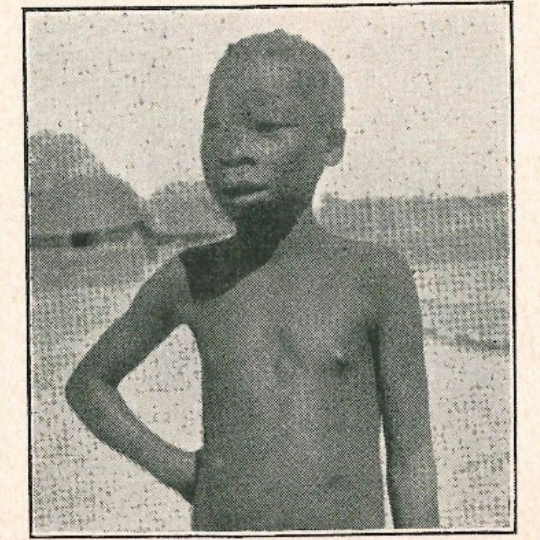 outside. Outside could be dangerous if wild animals were around, so my mum always had a stick handy. One night, a particularly dangerous wild animal was hunting and I became his prey! It was a hyena, and it circled around us silently, waiting for the perfect opportunity. He caught me full on and put his jaws around my head and tried to drag me off into the bushes. My mum fought the wild beast and saved my life, driving him away from us. She brought me straight to the hospital.  And there, as they treated my wounds, I was also diagnosed with leprosy.

Most people would think this was a disaster! But it actually set me on a path I'm grateful for. I met friends just like me at Lui school, a special school for children with leprosy. I've learned to sing and read and write. I'm the only one who can sing high and I sing hymns often with my choir teacher. I am content in my life and I am recovering from leprosy. I have lots of friends and I am loved by those around me.

Agnes and Simeon: their story
Simeon
“Simeon is my only one.” It felt good to hear those words. It felt heavy and important. I had a role to play and I mattered to my sister.

Our mother died and left us all alone. Our father, who had leprosy, is also dead. We were so alone. We starved and begged, gathering nuts to sell to people to make enough money to feed ourselves. At night, we hid away under people's doorways or steps. More often than not, we slept in the bush. We clung to each other during those dark, scary nights. Hungry and afraid.

Agnes
I knew we’d be alright. And I never let Simeon see me when I was at my lowest. I’d wait until late in the night and then the tears would fall from my eyes – but I never made a sound. I never let on to him just how bad it was. Before mum died, we attended Agulu Clinic, run by Dr Money, for our leprosy treatment. We managed to wrangle some food from Dr Money, even though Simeon hated the injections and thought they were painful. Dr Money knew how we struggled and he helped us escape a life of destitution. He sent us to the leprosy settlement at Oji River to be cured and cared for. It took months to shake off those long days and nights of fear and hunger. Here, at Oji River, we go to school. We have good food. We have friends. And we will always have each other.

Next entry: Up to 80% less people coming forward for leprosy diagnosis and treatment in the wake of the COVID-19 pandemic.