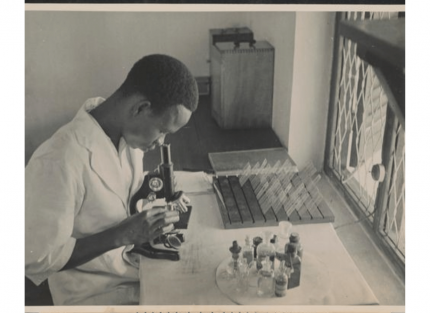 "Who will care for my patients?"

From its inception, Lepra concerned itself with the idea of being global. It wanted to “embrace all, no matter their circumstances” in order to confront the prejudice and discrimination suffered by the most vulnerable in society: people with leprosy.  Lepra sought out the most marginalised, those of the lowest social status, those in the hardest to reach places. Lepra aimed not just to cure leprosy, but to be the antidote to the difficulties people with leprosy faced.

Inspired by Global Love Day, we look deep into the archives and find stories of love and compassion throughout our history, accounts of those suffering from leprosy who became the ones offering love; healed not just by medical treatment but through human warmth and compassion.

In 1950’s Nigeria, a thriving leprosy settlement named Uzuakoli was offering support and treatment to those most in need. Dr. and Mrs. Davey ran outpatient clinics from there, going into the surrounding villages to help people affected by leprosy who weren’t part of the settlement. They were aided by a team of medical technicians who were persons affected themselves. One such individual stands out from the rest. His name was Ben Onyekwere and he reached out to the most afflicted and the hardest to reach.

Ben had been at the settlement for years, offering his service as a nurse, despite being affected by leprosy himself. When he was discharged, having been pronounced free from leprosy, he remained in the settlement, taking on the role of Leprosy Inspector and going to outlying villages to diagnose others. He gained a great reputation whilst working alone in the most difficult areas, where prejudice was rife and the patients were overwhelmingly frightened and utterly miserable. His charisma and authoritative demeanor started to work wonders on those with leprosy, and their lives started to improve dramatically. But then, disaster struck, as his leprosy symptoms returned. Following advice from his doctor, Ben began treatment immediately, alongside intensive physiotherapy on his already weakened hands. He was prohibited from leaving the settlement and he soon became despondent, worrying not for himself but for his patients.

Ben knew that there was no one who could take on the job he had been doing, as did his doctor. He had become the loudest advocate for people affected by leprosy and he worried about the people he had met and their lives without him. Ben begged to remain in his post and promised to do all the physiotherapy exercises that were needed whilst going to the outlying clinics. Despite his leprosy returning, Ben continued to work, traveling countless miles to provide the essential care he had been giving to the destitute. He could not and would not abandon them.

Ben made a difference through love. He brought healing and transformation to others, despite his own fragility. For that reason, we at Lepra celebrate Ben today, on Global Love Day.

Next entry: The Pavers Foundation supports Lepra with £5000 donation