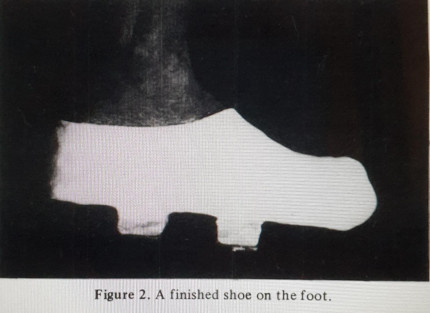 Footwear: Stepping from the past to the present

November sees the celebration of Giving Tuesday; a global day of giving where everyone, everywhere can do something to support the causes that mean so much to them. Harnessing the power of social media and collaboration, it aims to inspire millions of people right across the world to come together on one day to celebrate the charities and communities that mean so much to us all. Shining the spotlight on just how transformative customised footwear for people affected by leprosy can be, this year Lepra is turning Giving Tuesday into Giving Shoesday.

The nerve damage caused by leprosy leaves people affected by it vulnerable to burns, cuts, ulcers and injuries that can potentially lead to severe damage to fingers, toes, hands and feet resulting in permanent disability.

Lepra provides free protective, tailor-made footwear to help people to walk comfortably and without fear of possible injury; restoring a sense of independence to people affected by leprosy and enabling them to return to their communities and work for a living. Mobile shoe vans staffed with highly-skilled shoe technicians measure and deliver footwear across isolated and remote regions. The shoes are made from a special multicellular rubber (MCR) and designed to protect ulcerated feet and promote healing.

Throughout our history we have recognised the importance of footwear and have worked at the forefront of its development. Today we invite you to look back at some of the shoes which were being made in Lepra’s past, and how experimenting with different styles and materials helped in the advancement of footwear. We also want to look into the emotional impact of having foot disabilities due to leprosy: and, most importantly, what it meant to have shoe and leg support to restore both normal usage and a sense of dignity.

Right from the earliest stages of symptoms, people affected by leprosy faced the prospect of prejudice and injury; a young boy called Sempa tells us of his experience prior to reaching the leprosy settlement at Kumi-Ongino, Uganda;

“At the age of six I went to school for one year but was found to have leprosy and was asked to leave. My mother continued to look after me but the rest of my community shunned me. I knew that in the night, whilst I was sleeping, rats were nibbling my toes but I could not feel them doing it. I developed ulcers on my feet”

Even after receiving treatment, the nerve damage caused by leprosy cannot be restored so ulceration can continue to cause wounds. Dr Harold Wheate, in Kumi-Ongino, Uganda, between 1949 and 1953, tells us of the impact ulcers had on a young man affected by leprosy;

“Ochwo, a lad of about eighteen, had been at Kumi for many years. As a result of leprosy he developed one of those ulcers on the foot which just refuse to heal, and eventually spread to the bone. Four years ago part of his foot was amputated. The operation wound did not heal properly, as happens sometimes when the nerves and blood vessels of the skin have been affected, and ever since Ochwo has been able to walk very slowly only with the aid of a stick; he could never run nor join in the usual games. He just sat.”

Lepra Review from 1972 highlights that many of the beds in leprosy hospitals were occupied by those suffering from foot ulcers rather than specifically people affected by leprosy; demonstrating an essential need for protective footwear. The Review went on to stress the importance of well-fitting shoes;

“what it means to the individual patient, is to be able to live his life independent of a hospital…”

The development of shoes or sandals which would protect the feet and prevent ulcers was clearly vital. If we look through the scientific articles between the 1960s and 1990s, we find that there were many papers which focus on the materials and designs to create the most effective footwear. Of particular interest were the pressure points that could be generated as the foot moved, resulting in ulcers. Ideas like the ‘double-rocker’ (1983) aimed to prevent this occurrence and the basics of the design are still in use today. 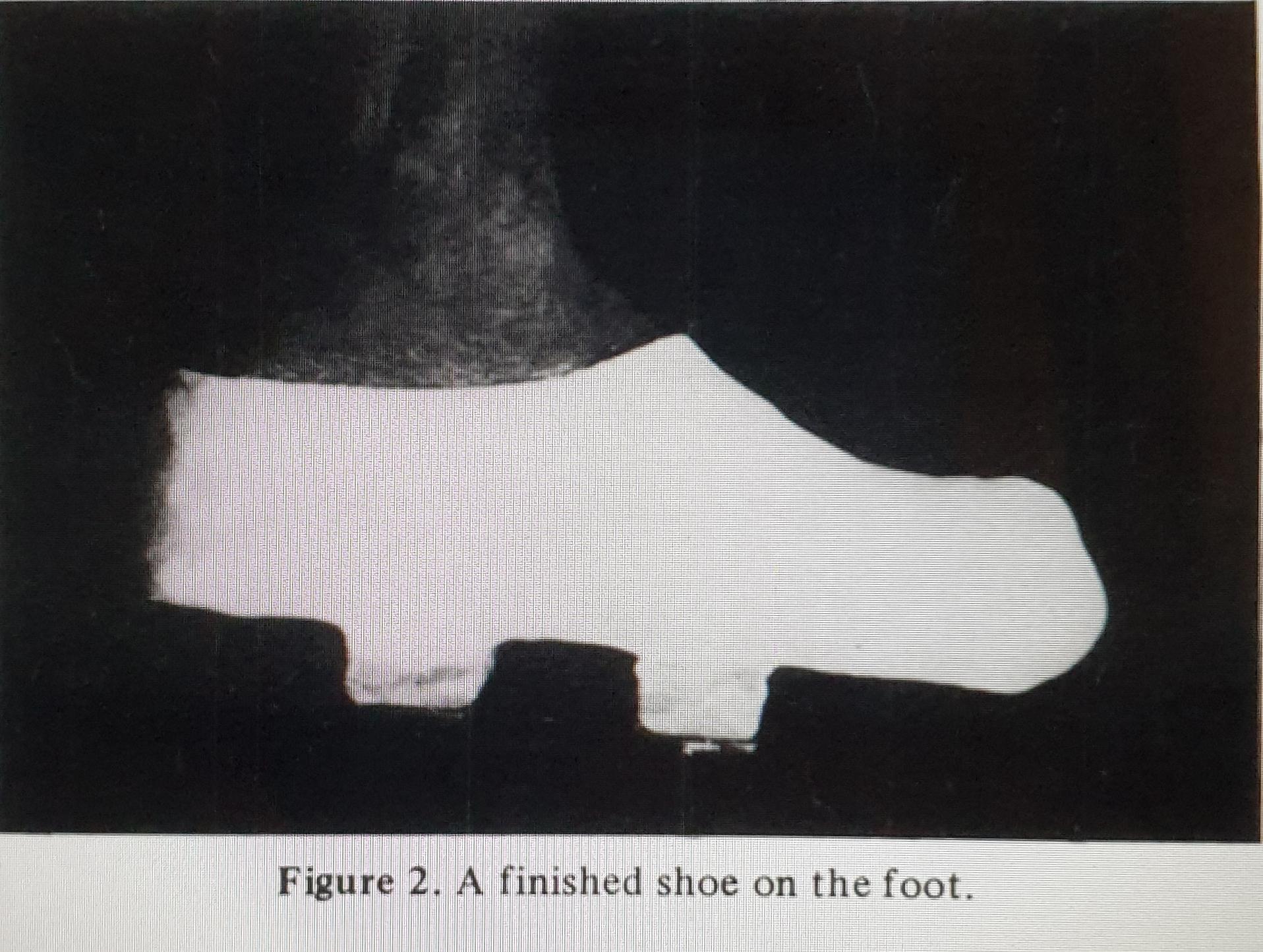 Material choice was also of vital importance; the design pictured below, from 1987, used canvas. A company called Bata designed and produced specially-deepened canvas shoes and ankle-high boots with microcellular rubber (MCR) inner-soles. Their appearance, identical to conventional shoes sold in local shops, meant that they didn’t immediately differentiate the wearer as a person affected by leprosy, therefore negating some of the discrimination they may face. They fastened using Velcro straps which were also very popular amongst people who may have some loss of sensation in their hands. 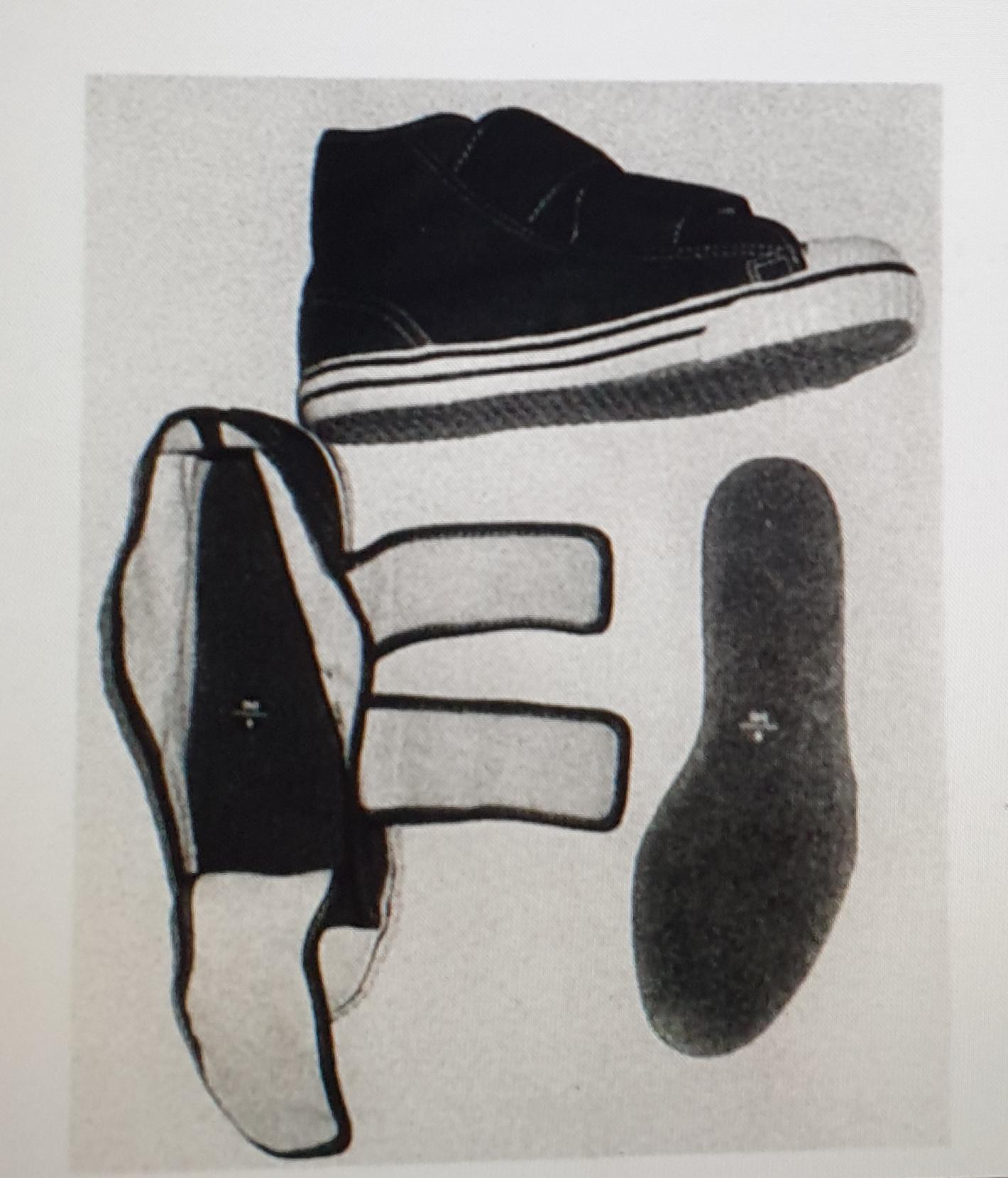 The use of microcellular rubber sole was a crucial component in supportive footwear. Prior to that many soles were made of materials easily found or cheaply constructed such as cow-hide, split car tyres, or vulcanized rubber. The sturdier MCR could not be easily-pierced by thorns or nails and also had an element of ‘bounce’ which provided cushioning. Strap positioning was also of vital importance; the Y strap seen on the image below hugs the contours of the foot whilst avoiding squeezing sensitive or damaged areas.

As technologies and research developed, the footwear designs were optimized to avoid concentrated pressure that could result in new ulcers whilst providing support and protection. But there remained other factors to consider such as cost; still a barrier to shoe provision today.

Emphasizing the difference that footwear can make, we return to the story of Sempa, the young boy whose toes were eaten at by rats.

When, with rest and regular dressing, the ulcer on his foot had healed, he joined the 320 other children in the school. He was the most seriously affected by leprosy; he couldn’t speak the local language and seemed to be floundering again. But, bright as he was, he quickly learned the language and made friends, and the friends made all the difference to him. Here he is in the picture with his friend, his damaged foot slightly behind his healthy foot, an additional calliper around his knee. His sandal has been modified and we can see that there is a cord running from the top of the sandal to the calliper on his knee which gives him the ability to walk. He is looking into the camera with a smile and his words express how he has moved beyond his bad experiences;

“I have no fears now, I have many friends here and my future is in your hands.” 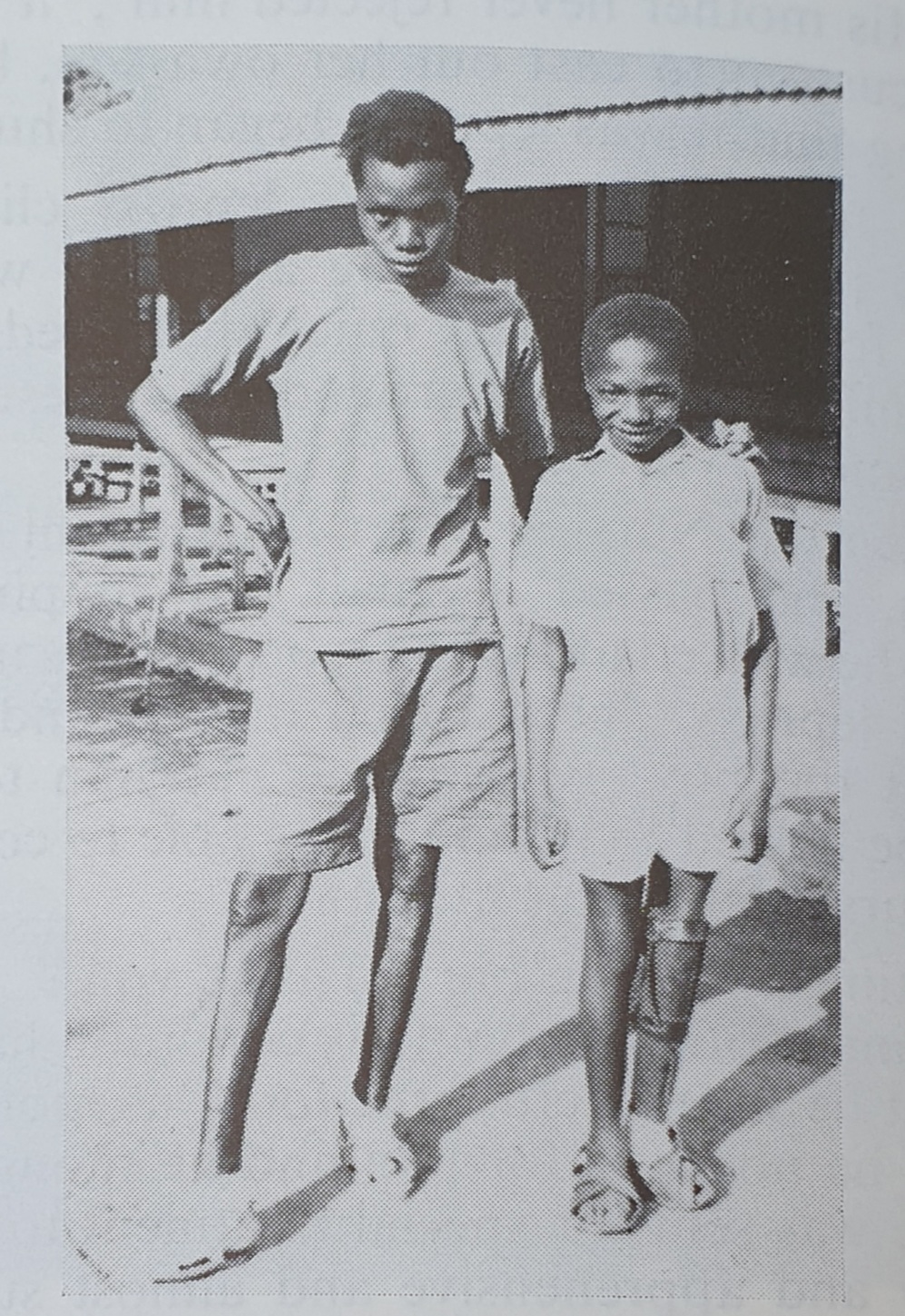 3. Sempa (with supportive footwear) and friend.

Despite a tragic beginning, Sempa’s story has a happy ending thanks to a seemingly basic intervention that restored his freedom of movement, and in so doing, gave him confidence and dignity for the first time. It costs Lepra £6 to provide protective footwear to a person affected by leprosy and yet that footwear has the power to transform their life. We hope that through reflection on the evolution of our footwear in the build-up to Giving Shoesday, we can move one step closer to changing the lives of people affected by leprosy. 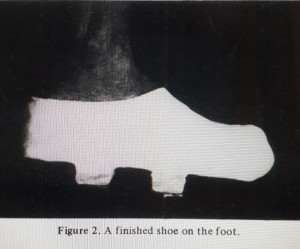 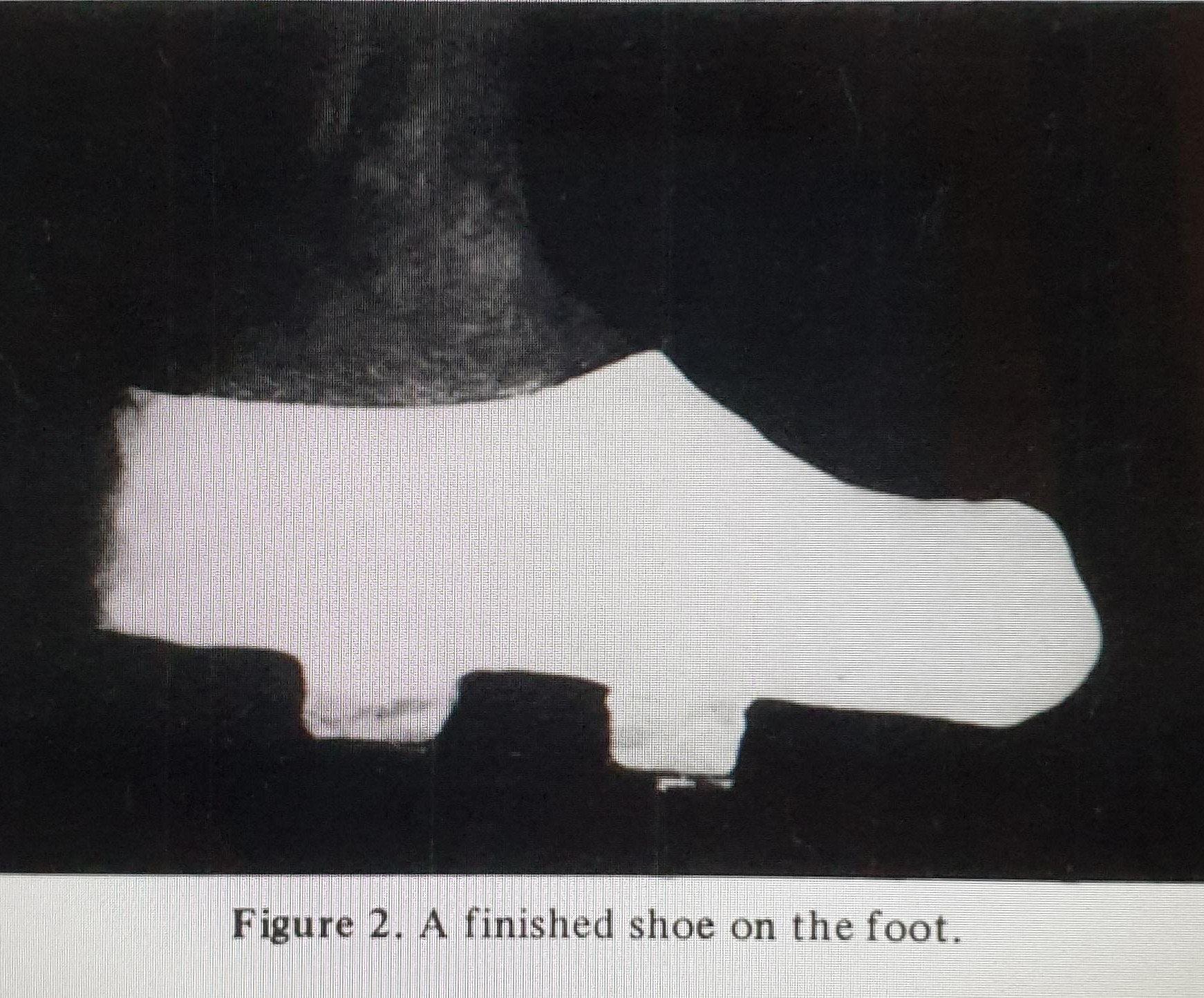