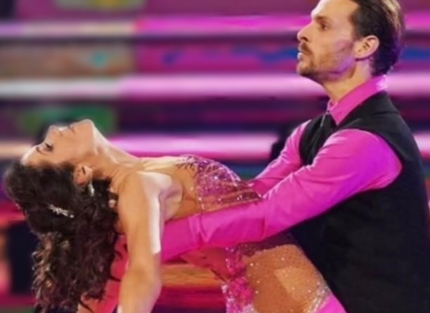 Our ambassador, Victoria Hislop, took part in Dancing with the Stars (Greece) recently. Here Victoria writes about her dancing experience and has kindly donated her fee to help our work improve the emotional wellbeing of people affected by leprosy.

“Over the past twenty years that I have supported Lepra, I have fondly imagined I might take part in a Marathon or a long-distance cycle ride to raise money for this very worthwhile cause.  But the truth is that I knew I would never make it beyond the first five miles (either cycling or running)…. However, when an invitation came to take part in Dancing with the Stars in Greece, I immediately said “yes” and decided to commit my fee to Lepra.

When BBC’s “Strictly" became a huge success, the format was franchised to dozens of countries around the world under the brand name “Dancing with the Stars”.  This year, a TV channel in Greece decided to launch it on their viewers - and along with sixteen other celebrities, I was invited to learn to dance.  Since the success of The Island (my first novel set in a leprosy hospital in Crete), I have been a familiar face in Greece and was given Greek citizenship two years ago, hence the reason for the invitation.  It was a wonderful opportunity - I love dancing (in my own kitchen and at parties) and I am an addict of the Saturday night series on the BBC.

I went over to Athens in mid-September and began training.  My partner was a wonderful young dance professional, Telemachos Fatsis, and week by week he taught me every kind of dance: waltz (both English and Viennese), cha-cha, salsa, quickstep, and jive.  They were magical weeks.

Ironically, it turned out to be more like training for a Marathon than I could have imagined.  We practised seven days a week, I had blisters, regular need for physiotherapy and I ate my own body weight in bananas, pasta, and nuts to keep going.  The night of the “live” shows however was very different from a Marathon.  A flock of butterflies seemed to take residence in my stomach for those evenings - dancing in front of a live audience, with a big studio audience and millions of people around Greece tuned in to watch, was sometimes terrifying.  But the adrenalin rush was wonderful too.  As were the astonishingly beautiful dresses (thousands of sequences and beads, layers of tulle and net), the hours of being pampered by hair stylists and make-up artists, the fake tan, eye-lashes and nails.

It was a thrilling, once-in-a-lifetime experience.  And I was even paid for it.  Maybe I am now fit enough to do a Marathon.  Let’s see…."

If you're tempted to run a marathon or have been inspired to dance for Lepra, we'd love to hear from you! Take a look at our fundraising events and sign up to raise much-needed funds for people affected by leprosy or lymphatic filariasis.

Next entry: The Impact of Discriminatory Laws: Segregation