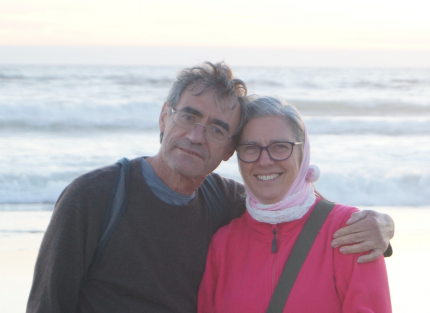 A lifetime of kindness

You will often hear people speaking about Lepra as a family and that is undoubtedly our greatest strength. No matter the contribution, together we work to achieve something great; our collective mission to beat leprosy.

For nearly 100 years, Lepra has been dedicated to finding, treating and advocating for individuals living with leprosy; arguably the world’s most marginalised and vulnerable people. Lepra has prioritised being evidence led, an approach which culminated in the use of Dapsone in 1948, adopted as the cure for leprosy and still used as one of the three antibiotics which make up the multi-drug therapy medication prescribed today.

Our work attracts a loyal and dedicated army of supporters, two of whom have kindly provided an insight into why they choose to support leprosy. Supporters like the Readers.

Meet Ian and Dorothy Reader who have supported Lepra for over 35 years. Ian was a fresh-faced graduate, traveling across India, when he first met people affected by leprosy.

“I saw for the first time people with leprosy and how they were treated (and shunned), it shocked and upset me to think that people could be treated in that way because they were unfortunate enough to have a disease that was not their fault and that could afflict anyone”.

Ian and Dorothy later worked in Japan, Ian as an academic researcher, where his studies gave him incredible insights into the discrimination and prejudice faced by people affected by leprosy, which many still face today. After moving back to the UK, Dorothy and Ian had both the financial security to become more involved in the fight against leprosy, and together chose to support Lepra with regular support given through a direct debit.

Following a professorship in Hawaii, Ian visited the former leprosy settlement of Kalaupapa and had the opportunity to meet people who have been affected by leprosy. He described to us the memory he will always carry, that of the dignity of the people he met, despite the challenges they faced.

The Readers' life-long commitment to people affected by leprosy, and their deep understanding of the struggle faced by so many throughout history, represents a selflessness echoed by so many of our long-term supporters.

Their commitment to the cause is also reflected with a personal decision to leave a gift in their will to Lepra; allowing us to continue our work to beat leprosy. Read more about leaving a gift in your will.

Would you like to share your story and why you choose to change lives and support people affected by leprosy? We would love to hear from you, please reach out by calling or emailing Olivia on 01206 216700 or OliviaE@lepra.org.uk